Halloween Ends is the conclusion to the re-boot trilogy that kicked-off in 2018, and it delivers something fresh and new with a fierce duo in Laurie and Allyson. Check out the details in my parents guide movie review. 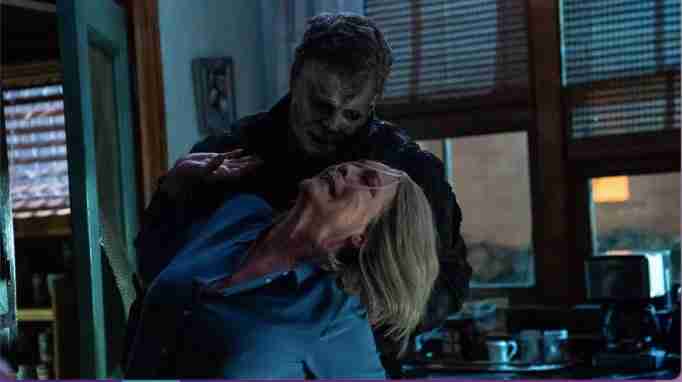 Halloween Ends drops in theaters and is also streaming on Peacock tomorrow, October 14th. It’s been over 40 years and 13 installments since the franchise released its first film, shaking audiences to the core with the psycho serial-killer Michael Myers, who has haunted dreams and been a Halloween costume staple for decades. The new film, whose title informs audiences it is “the end,” brings back the Scream Queen, Jamie Lee Curtis, facing Michael once again. Check out the details in my parents guide movie review.

In Halloween Ends: Four years after her last encounter with masked killer Michael Myers, Laurie Strode is living with her granddaughter and trying to finish her memoir. Myers hasn’t been seen since, and Laurie finally decides to liberate herself from rage and fear and embrace life. However, when a young man stands accused of murdering a boy that he was babysitting, it ignites a cascade of violence and terror that forces Laurie to confront the evil she can’t control. 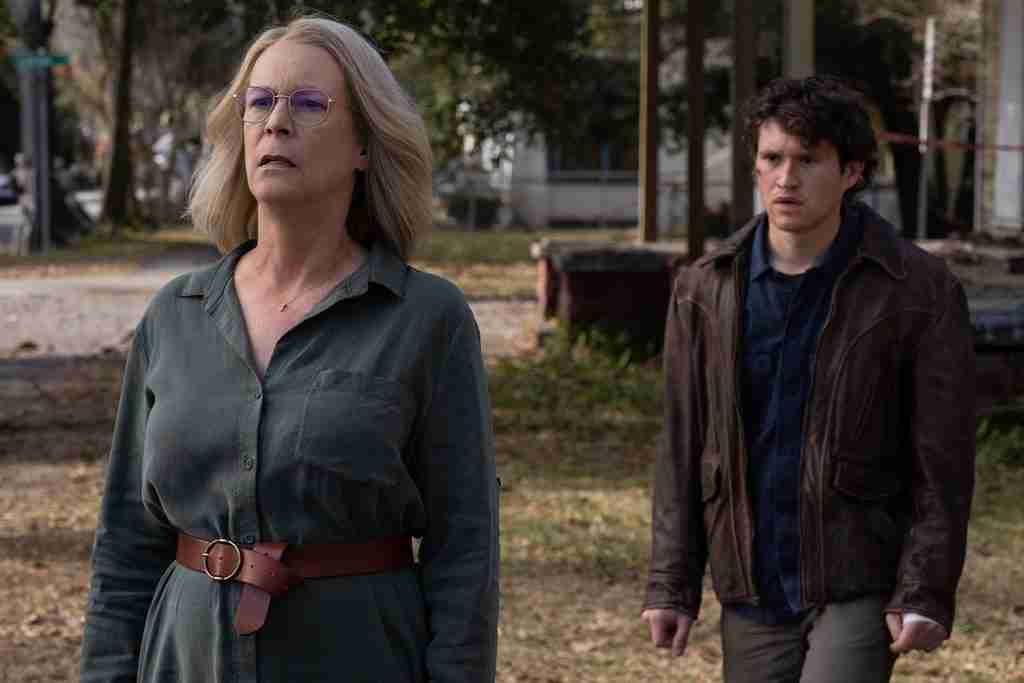 Let’s take a look at what parents need to know before letting their kids watch Halloween Ends.

Mature Content: Not surprisingly, the biggest concern for parents in the film is the violence it contains. With this being a horror/slasher film, there is blood, gore, and murders to be seen throughout. To be fair, this film contains fewer killings and gore scenes than the first two films in the trilogy, but there is still plenty to justify the slasher label. There are difficult scenes throughout that have characters dying or murdered by falling and breaking their neck (a very disturbing scene), being stabbed, shot, run over, strangled, and even one scene that shows a character getting torched in the face. There is one particularly difficult and disturbing death scene that repeatedly shows a character’s face being smashed and their tongue shown to be removed. Characters discuss suicide, and there is a “suicide” that is shown off-screen. Characters are also shown consuming alcohol to the point of intoxication.

Halloween Ends is unlike any other Halloween film fans have seen before, which may have some loving it and others hating it. Those fans who have come to expect the typical slasher film with continuous kill scenes and jump scares with Michael lurking around every corner will be surprised to learn that this sequel to the trilogy, which released the first film in 2018, is very different from anything we’ve seen before from the franchise. This is evident from the very beginning, with a before credits scene one year after the events of Halloween Kills, which is intense but also unexpected. This sets up the film and reveals to viewers that they are not only in for a “killer” ride but also puts audiences in the mindset to prepare for something unforeseen for this final film.

The central theme of Halloween Ends is wrapped up in one word: trauma. The town of Haddonfield has experienced years of trauma. The family and victims of Michael’s attacks are traumatized. Even those who have had no contact with the tragedies of the past are experiencing some sort of trauma just hearing the name Michael Myers, as he disappeared years ago and all are dreading a possible re-emergence. The only one who seems to have gotten over their trauma is Laurie (Jamie Lee Curtis), who is tired of hiding in fear, and has decided to move on, settling in a home with her granddaughter, Allyson (Andi Matichak). Peace looks good on Laurie, that is, until Corey (Rohan Campbell) begins dating Allyson and she begins to see signs in him that she recognized in Michael. The trauma theme quickly shifts to questioning the root of evil, with a lingering question: Is evil a product of society or something lingering inside of some individuals ready to burst out? This question is tested when Laurie witnesses Corey being cruelly bullied, beaten, and even left for dead by teens in the town, and a change occurs in him as a result of these heinous events.

Halloween Ends has a superb cast with Jamie Lee Curtis and Andi Matichak as the driving forces of the film. Curtis and Matichak are fierce and bold, yet this time around, Curtis doesn’t need to tote a shotgun around to achieve “warrior” mode. Laurie has moved on and has found peace in writing a memoir, but when the moment calls for it, she quickly puts her keyboard aside and is ready for battle. Matichak gives that same female bad-ass vibe as Curtis, and a fun return to the franchise is Kyle Richards, who was just a little girl in the original film, reprising her role as Lindsey Wallace. While it was exciting to see Richards return, fans will be disappointed by the lack of screen time she actually had.

Speaking of lacking screen time in Halloween Ends, probably the biggest complaint fans may have is the lack of screen time the villain Michael Myers has in the movie. While this author enjoyed less Michael and more substance to the story, some fans who have come to expect this in a Halloween film will be quite disappointed. When the kills do come, however, they will not disappoint and deliver some brutual death blows that will have viewers wincing in their seats. Again, this is a very different film than we have seen before from this franchise, but if it truly is “the end”, then it almost has to be the case. Not all endings in film come the way viewers expect, and even less play out the way they want it to, but sometimes we end up with the finale that we need, and I feel like that was ultimately what we got with Halloween Ends. It doesn’t really go out with a bang, but especially for the people of Haddonfield, they just want the nightmare to be over at this point and move on with their lives. 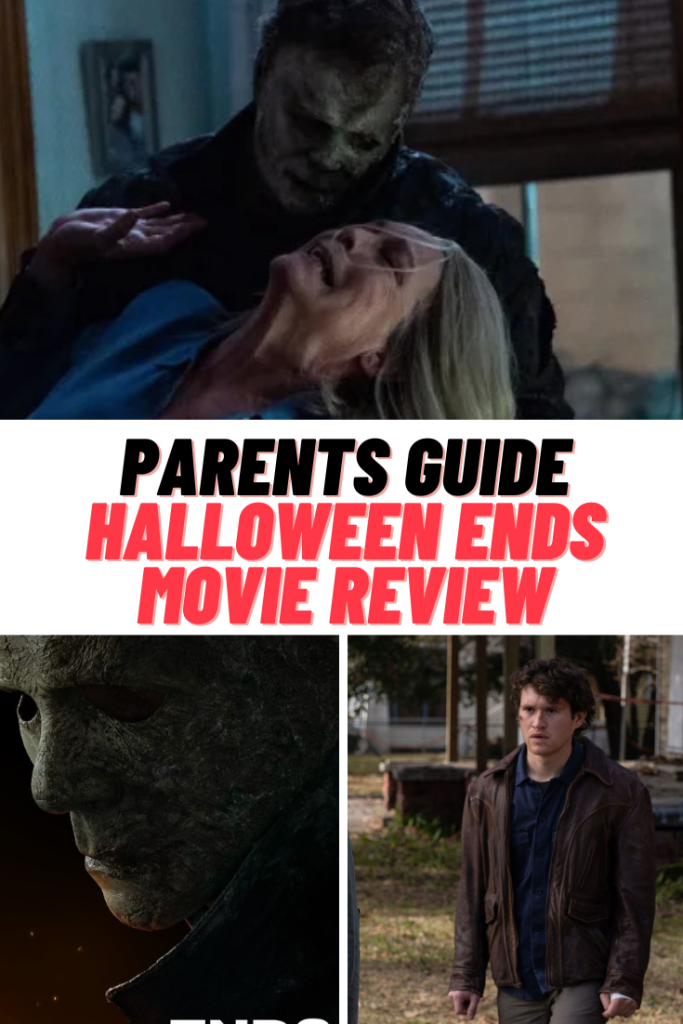