Glass Onion: A Knives Out Mystery is clever, funny, and has a phenomenal cast that takes this mystery to new heights. Check out the details in my parents guide movie review. 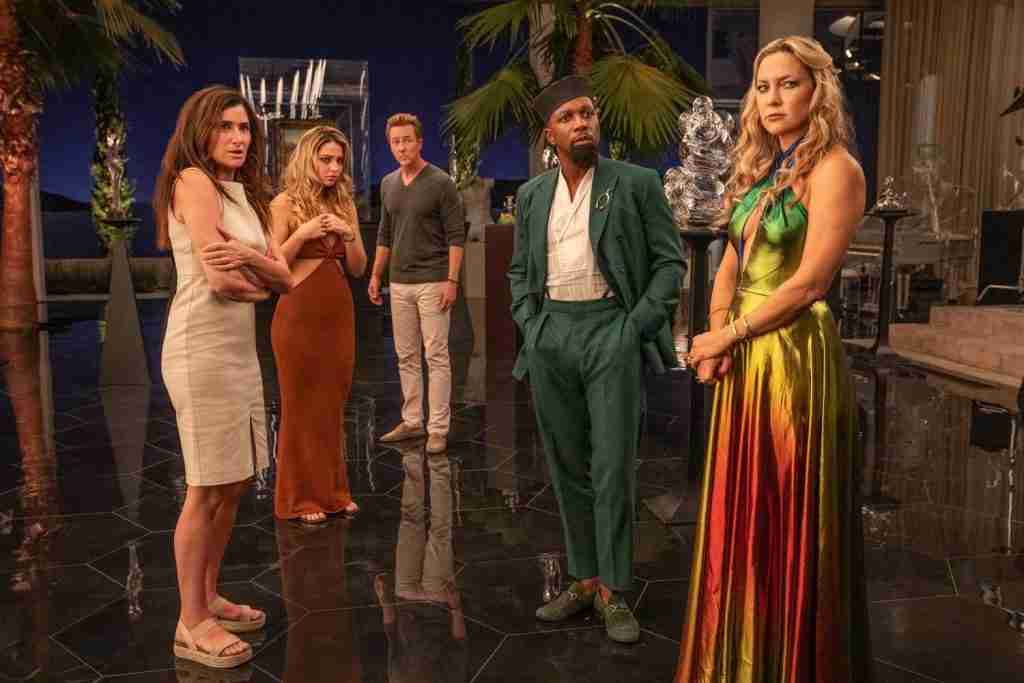 Glass Onion: A Knives Out Mystery drops in theaters on November 23rd and then streams on Netflix on December 23rd. The film is a sequel to the murder mystery film Knives Out and brings back detective Benoit Blanc, played by Daniel Craig, and the rest of the cast is entirely new, consisting of A-list actors including Edward Norton, Kate Hudson, Dave Bautista, and Janelle Monae. The film is clever, funny, unpredictable, and just as good as its predecessor. Check out the details in my parents guide movie review.

In Glass Onion: A Knives Out Mystery – Benoit Blanc returns to peel back the layers in a new Rian Johnson whodunit. This fresh adventure finds the intrepid detective at a lavish private estate on a Greek island, but how and why he comes to be there is only the first of many puzzles. Blanc soon meets a distinctly disparate group of friends gathering at the invitation of billionaire Miles Bron for their yearly reunion. Among those on the guest list are Miles’ former business partner Andi Brand, current Connecticut governor Claire Debella, cutting-edge scientist Lionel Toussaint, fashion designer and former model Birdie Jay and her conscientious assistant Peg, and influencer Duke Cody and his sidekick girlfriend Whiskey. As in all the best murder mysteries, each character harbors their own secrets, lies and motivations. When someone turns up dead, everyone is a suspect. 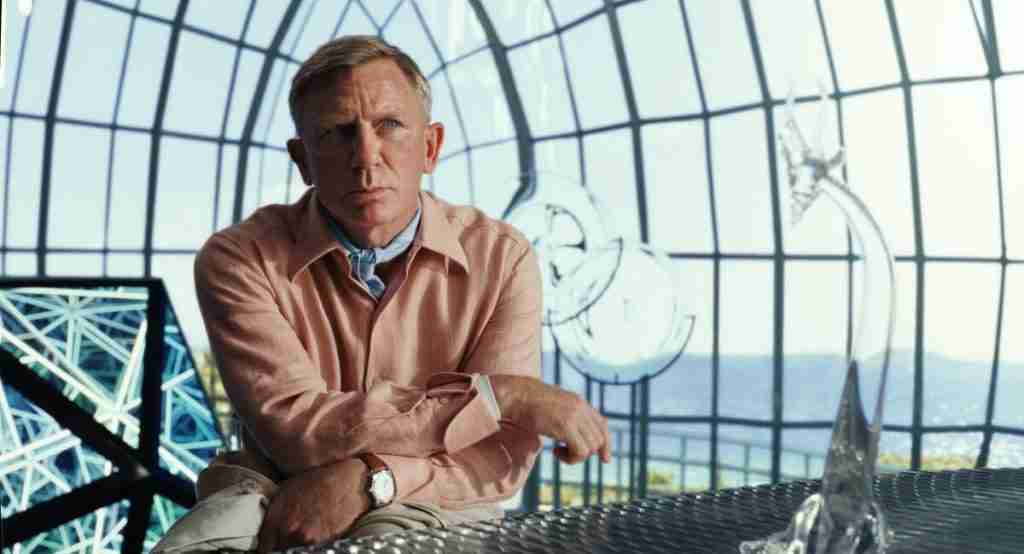 Let’s take a look at what parents need to know before letting their kids watch Glass Onion: A Knives Out Mystery.

Language: Glass Onion: A Knives Out Mystery contains strong language, with profanity used throughout. Lookout words include: one use of the word f*ck, sh*t, a**h*le, son of a b*tch, g-d d*mn, and phrases like, “what the hell.”

Mature Content: The biggest concern for parents in the film is the violent content it contains. Characters are shown being shot, poisoned, bloody, and wielding weapons. There are no nudity or sex scenes to speak of, but there is a scene that shows a female character on top of a male character with implied sex. There are, however, discussions surrounding sex, such as “t*tties” and “boners.” Characters are shown smoking cigarettes, cigars, and consuming alcoholic beverages.

While Glass Onion: A Knives Out Mystery is a sequel to Knives Out, do not let the word “sequel” deter you from running to the theaters to see this one. In most respects, a sequel is never as good as the original it is based on; however, Glass Onion breaks the mold and is just as good, if not better, than its predecessor. Daniel Craig is the only cast member to return to the franchise, playing his iconic character Detective Benoit Blanc, and is the true driving force of the film. Craig’s matter-of-factness and clever commentary make solving mysteries as entertaining as the story itself. Craig has really settled into the character with confidence and charisma and demands the attention of viewers, even when he shares the screen with some legends in the field.

While Glass Onion: A Knives Out Mystery is a mystery with a murder to be solved and a motive to be revealed, there is a subplot surrounding the pandemic, which makes the film relevant for the time period it was filmed during. Characters discuss quarantine, and in the first act, they are shown wearing their masks, which may have been included due to filming restraints at the time. And while the film does not bring up the political aspect of the pandemic or its effects, it does have an interestingly humorous scene when Birdie Jay, played by Kate Hudson, arrives in a netted-like mask that offers no barriers for the virus, yet was often used by mask naysayers who were “forced” to wear a mask and donned the netted ones out of rebellion. This mask perfectly fits Birdie Jay, as she is a self-centered, has-been actress who yearns for attention. Hudson has the look, being gorgeous and blonde, as well as the demeanor, to pull Birdie Jay off with perfection.

Glass Onion: A Knives Out Mystery is truly successful due to its talented ensemble cast. Along with those mentioned above, each member deserves accolades for their performances, which all aided in making this film so great. Edward Norton plays billionaire Miles Bron and delivers a poisonous performance that will remind many of the oligarch-type figures that are much discussed in today’s world, such as Elon Musk. Dave Bautista as the social media star Duke Cody is hilarious, as he regularly flaunts his gun and “guns.” Janelle Monae’s Andi Brand, Miles Bron’s ex-partner, whom he screwed over, is an intriguing role, and Monae’s stoic performance adds to the mystery surrounding the plot. With such a huge cast of talented and successful actors and actresses, the ensemble meshed well together and brought something special to each of their roles, making for an interesting rag-tag bunch.

Glass Onion: A Knives Out Mystery truly excels in its technical aspects. The film runs for 2 hours and 19 minutes, yet it never feels lengthy and keeps a steady pace with perfect timing. The second act is where the magic happens, where viewers are propelled back in time and events are replayed, bringing the audience up to speed on what is truly going on as the puzzle pieces perfectly fit together with a “eureka!” ending. The culmination of the acting, the writing, the production, and the plot make this sequel not only a worthy follow-up to the franchise but will have fans excited for more to come. Often, movies that are chock full of stars don’t always work out, but this one shirks that trope to great effect. When a story is as good as this one, it shouldn’t be missed. 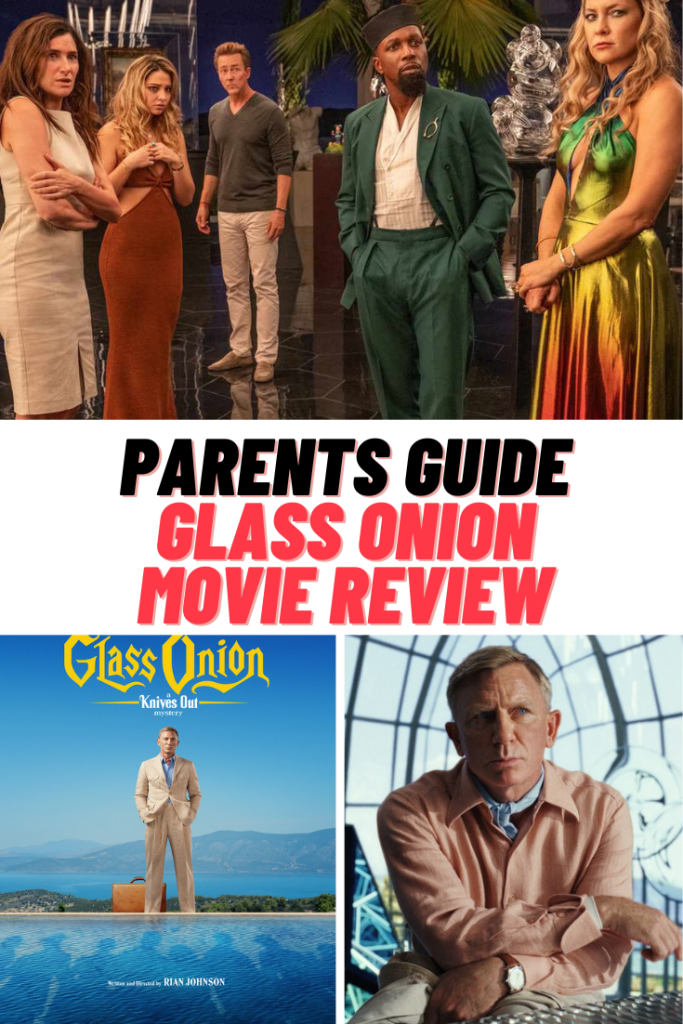