Netflix’s That ’90s Show is That ’70s Show 20 years later with a new set of teenagers. Check out the details in my parents guide review. 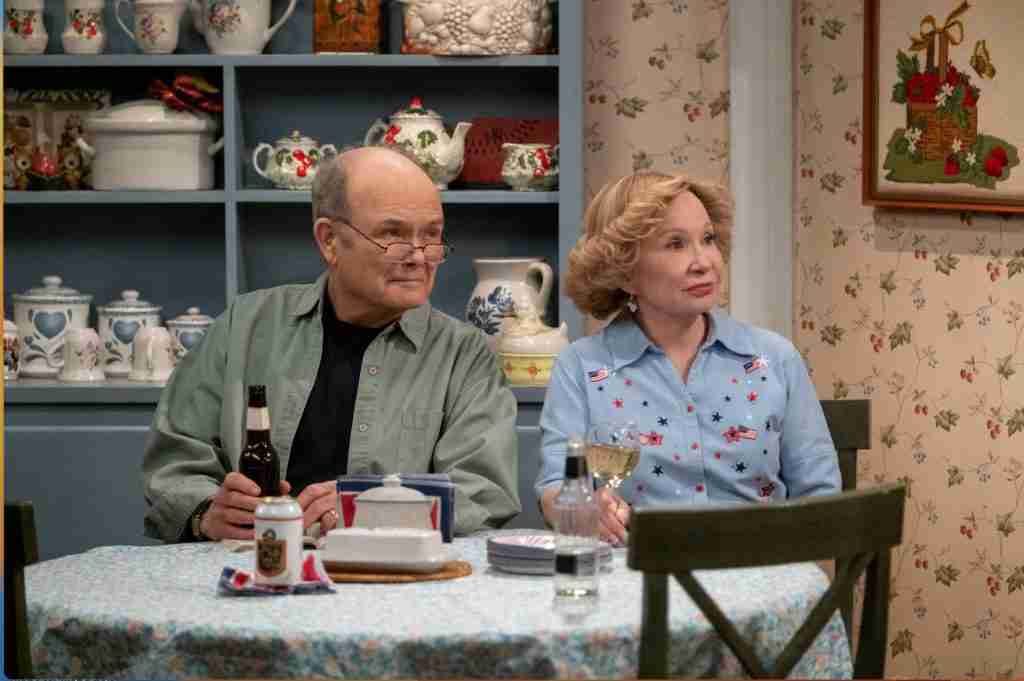 Netflix’s That ’90s Show drops on the streaming service tomorrow, January 19th. The new series brings back all the nostalgia from the decade and from the original show, That ’70s Show, including some of the cast. The writers have taken the stance of “don’t fix what isn’t broken,” giving fans the same premise, jokes, and feel of the original with just a new set of teenagers. Check out the details in my parents guide series review.

Netflix’s That ’90s Show: It’s 1995 and Leia Forman is desperate for some adventure in her life or at least a best friend who isn’t her dad. When she arrives in Point Place to visit her grandparents, Red and Kitty, Leia finds what she’s looking for right next door when she meets the dynamic and rebellious Gwen. With the help of Gwen’s friends, including her lovable brother Nate, his smart, laser-focused girlfriend Nikki, the sarcastic and insightful Ozzie, and the charming Jay, Leia realizes adventure could happen there just like it did for her parents all those years ago. Excited to reinvent herself, she convinces her parents to let her stay for the summer. With a basement full of teens again, Kitty is happy the Forman house is now a home for a new generation and Red is, well…Red. 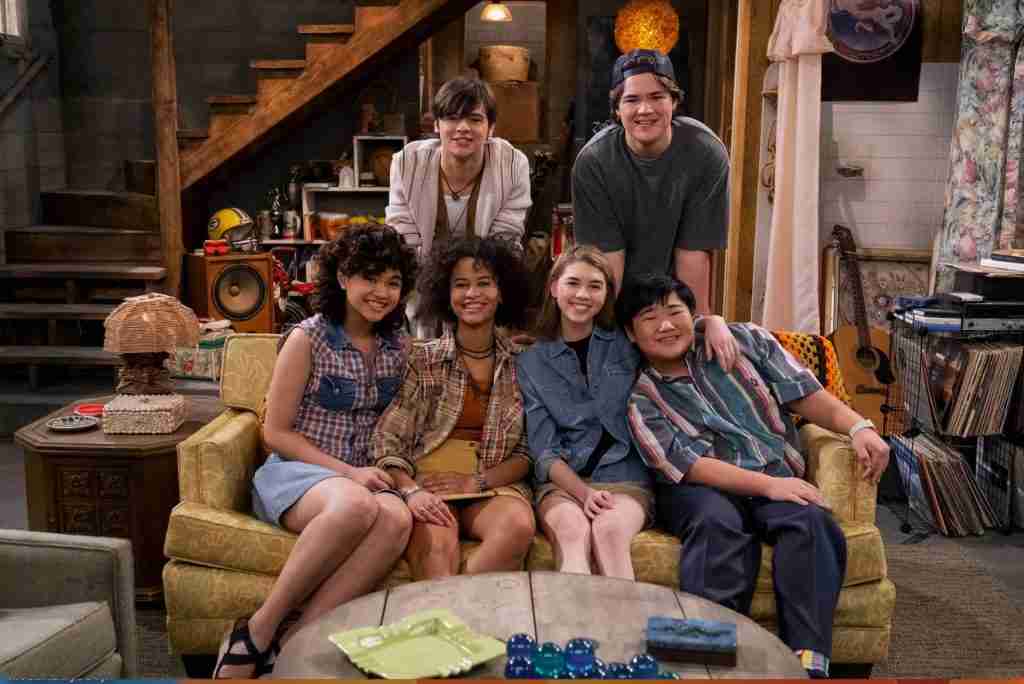 Let’s take a look at what parents need to know before letting their kids watch That ’90s Show.

Mature Content: Like its predecessor, the series shows teenagers smoking and getting high on cannabis. There are also many discussions surrounding sex, periods, and developing bodies (breasts) that teens might deal with. There is implied sex, and even talks of vaginas and “boning.”

One of the reasons That ’90s Show has the makings for sequel success of That ’70s Show is in its ability to take something familiar and make it fresh again. This isn’t the first time an attempt at a sequel has been made; in 2002, the Fox network dismissed That ’80s Show after 13 episodes, canceling it right before the final episode aired. Unlike That ’90s Show, That ’80s Show enlisted an entirely new cast and focused on a group of twenty-somethings finding their way through San Diego in the ’80s. The show had no links or ties to the original, a huge error that was obviously noted by the creators of That ’90s Show, which brings back the ’70s show parents, Red and Kitty, played by the original actors Kurtwood Smith and Debra Jo Rupp. The move to bring back the duo was simply brilliant, as it not only carries the nostalgia of the past but also the ingredients and banter that made the original such a classic. Fans will cheer the first time they hear Red use his signature insult, calling his son a “dumbass,” or when he continues to poke fun at Eric’s “baby skin” by pointing out that the water in the house is set too hot.

Red and Kitty aren’t the only original cast memes to return to That ’90s Show; the first episode starts out with now-married Eric (Topher Grace) and Donna (Laura Prepon) visiting Eric’s parents in Point Place, Wisconsin, with their daughter Leia (Callie Haverda). Returning to the scene of the crime, Red and Kitty’s familiar home and even more familiar basement, brings back so many memories and a sense of nostalgia. This familiarity and nostalgia carry the first four episodes of the series, even with some unexpected guest stars to raise the stakes. However, as the show begins to progress, new characters and new teens begin to take center stage and carry the storylines, although Red and Kitty are always a constant in the background. Another brilliant move by the writers is to gradually introduce the new cast of teenagers to an older generation of fans.

When it comes to the new teens on That ’90s Show, the writers went full cliche, including the stereotypical dumb jock, a closeted gay kid, an athletic kid dating the smart girl, and even a Kelso child. That’s right, one of the kids is the offspring of one of the most beloved couples onscreen and offscreen, Michael Kelso (Ashton Kutcher) and Jackie Burkhart (Mila Kunis). Unlike Kelso, his son in this new group is not the slowest of the basement gang, but he is the designated “hot” one of the group. And although Leia does have many of her father’s qualities, such as being a bit nerdy and awkward, she also has her mother’s genes and is a star athlete with a bit of “game.”

That ’90s Show isn’t perfect and comes with its flaws, at times being too “cheesy” with cameos and plot points that don’t always come together, along with some jokes that fall flat for the times. However, it holds enough of the blueprint of the original to draw in fans and keep them there. It also invites new feelings for those of us who lived through the actual ‘90s, bringing with it the nostalgia of the time in addition to that of the show being so closely hued to the formula that made That ‘70s Show so great. Early on, it seems to rely a bit too heavily on the original characters and doesn’t allow for the audience to build relationships with the new teens, but I anticipate that to change as the show progresses. 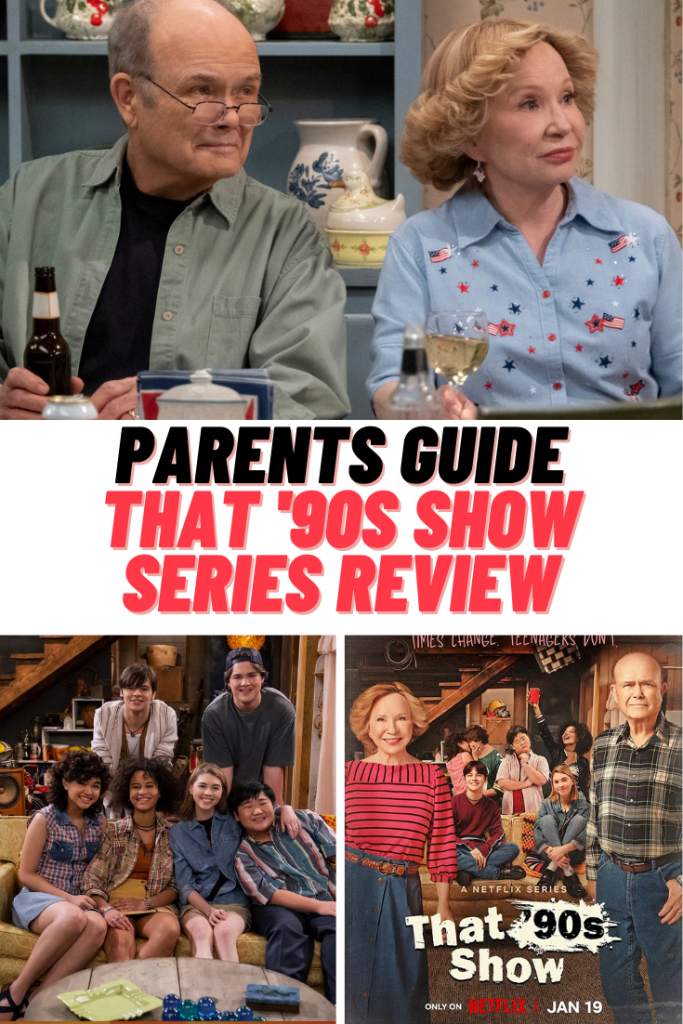