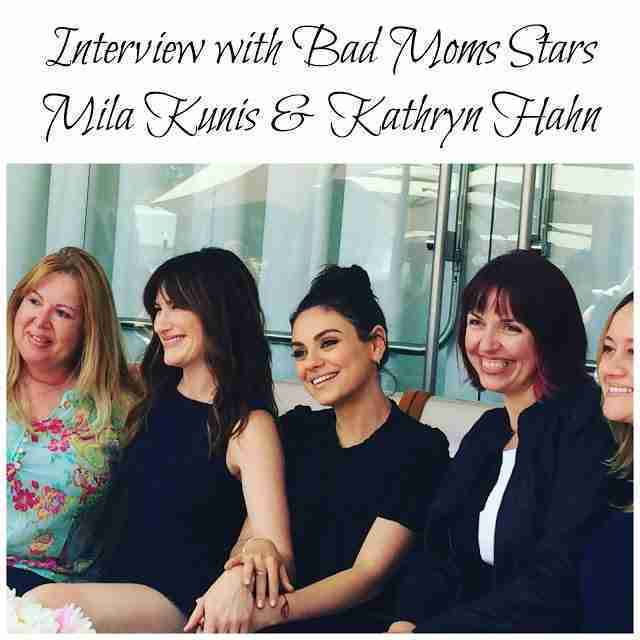 Bad Moms opens in theaters July 29th!
When Mila Kunis and Kathryn Hahn sat down to speak with us about their upcoming movie, Bad Moms, it was like hanging out with my besties.  They were down to earth, extremely funny and totally related to all of us moms out there!  I’m sure with them being moms themselves, they “get” us and this is projected on the screen.  Here are some highlights of the interview. 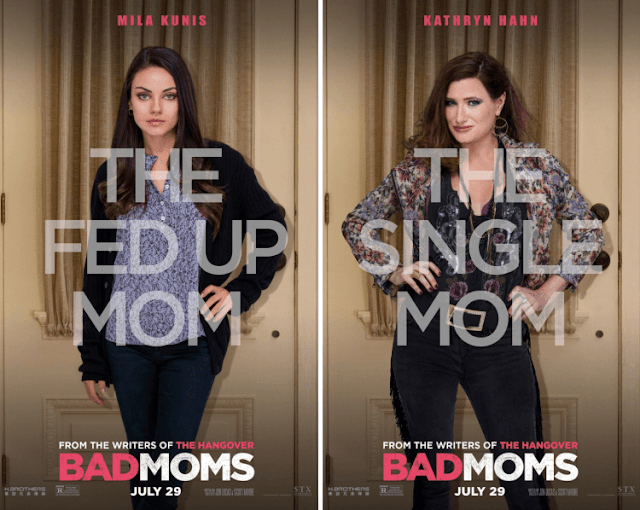 Hahn on being part of Bad Moms
Kathryn Hahn: I feel like had I not been lucky enough to be in this movie, I would have been so excited to see it. I would have started an e-mail chain and got all my mommy pals. I just feel like, so often moms and mommies in movies are kind of painted with like a saintly glow around them.
We know that that’s just not the truth. We’ve got so much more complexity, I was so excited to see mommyhood examined from the way that we all know it, or at least would love to experience. I know there’s a ton of wish fulfillment in this particular movie. So much of it looks like a ball.
We deserve it, damn it. Yes. Yes. I have a six-year-old and a nine-year-old, and you guys are obviously the cool bloggers and the chill bloggers. I found it really, really helpful especially because my parents don’t live in LA. It’s not the same culture where your mom comes over to help you babysit. At least, I wasn’t lucky enough for that. So, you depend on your pals or other amazing women that are going through it or have gone through it. You can’t do it by yourself. And it takes a village. I think this movie is such an awesome message of the solidarity. Like, we’re all in it together. We can’t just lessen those expectations.
Their Bad Moms Moments
Kathryn Hahn: My son was maybe a half a year old, not even. I keep making him younger as it goes to kind of make me feel better. He just kept crying! What’s the matter? I was checking his fingers and toes. I didn’t know what he would, he wouldn’t eat. It was like a mess. Finally changed his diaper, and one of my hairs had wrapped itself around his nuts like five times. Almost castrated my child.
Mila Kunis: My story, I’ve only been a mom for 21 months, but it’s pretty good. Wyatt was like at seven, eight months old, and I was driving to visit my husband at work. And driving with an eight month old for a couple hours is like going on a road trip. You have to pack all this stuff up in anticipation of everything going horribly wrong with the first baby. Second baby doesn’t matter. First baby, you’re like, oh, my God, everything’s going to go wrong.
So, you pack the car up with all this stuff. I was like I did it. I put her in the car. I high five myself. I’m driving down the 101. And I was like oh, my God, I’m doing really good today. She was being really quiet, and I was like, oh, let me look in the rear-view mirror to make sure everything’s okay. And I look, and she’s happy as can be, but just not strapped in. I was like, oh, **** me. I’m on the 101, and she’s just fine in her car seat, nothing, no strap whatsoever. I think I just turned white. It was like what do I do? So, I pulled over. I calmly like crawled in the backseat, strapped her in, continued to drive, I’m never talking about this story to anybody ever. It’s just going to be me, myself, and I, lesson learned. I’m so grateful.
I literally pull up to my husband’s work and just burst out crying. I was like I ****ed up. I ****ed up. And lo and behold, a year later, like two, three weeks ago, a month ago, I came to get Wyatt out of the backseat of the car, and my husband put her in. And so, I went in to get her out. And we were out, about. I opened the car door, and she’s not strapped in whatsoever. I was like thank God. I was so excited. I wasn’t alone. And everybody’s fine. Everybody lived. It’s only a little bit illegal. But, you know, I made a little bit of a mess up. 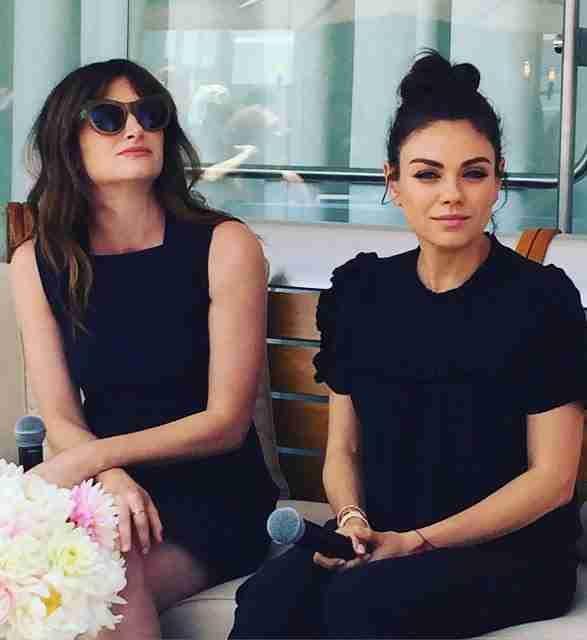 Hahn on wanting a Mommy Strike
Kathryn Hahn: I have a son and a daughter. My six-year-old has, as my mom would say, met my match. It’s so true. She is such a spicy meatball. She just gives it right back to me. That’s the difference between the girls and the boys too, is the like emotional minefield that is trying to navigate a girl. It’s like you’re a step ahead of me. What are we fighting about? I’m like what’s going to happen when she’s in high school? So, yes, there have been moments where I am like I need to go. I need to get out of here. Absolutely, I don’t trust what’s going to come out of my mouth. Do you know what I mean? Like, if I’m going to say something that we all regret, so, yes, oh, my God, absolutely. Time outs don’t work with her, though, because she’s just going to come right back, or she’s like, fine, I wanted to be by myself, or whatever. And she’ll make it her decision. I’m like, oh, my God.
Advice they would give their younger selves
Mila Kunis: I’d apologize to my mom sooner. I’m not kidding. I apologize to my mom. When I was like 22, I was like I’m so sorry. I was such a bi***. And she went, yes. And I was like okay. I wish I can go back to my 16-year-old self and say, they’re not against me. I think the biggest thing that like you grow up thinking the world’s against us, I mean it’s all hormones, and it’s angst. And you’re supposed to go through it.
But, I just wish I realized and understood just how much my mom and my dad, not to alienate my dad, but just how much my parents loved me, unconditionally loved me. If I called them and said I just murdered someone, they’d go, well, let’s figure it out. I know that in my heart, and I don’t think I quite understood that until I had my own child.
Kathryn Hahn: I would say absolutely just don’t waste your precious brain space worrying about that nonsense. So much nonsense was I worrying about that I wish that I hadn’t been, and it goes so fast. Like, who cares what people think? You know your kid better than anybody. You find your tribe that are the same that you’re like-minded mamas. And it’s all noise, the rest of it. But, it’s hard. I had never felt more young than after having my first kid because you really are like, I don’t know. It sounds like it’s so terrifying. But, then there is something underneath it if you just listen to it, you know exactly what you’re supposed to do.
Like Bad Moms on their Official Website, Facebook , Twitter, and Instagram.
Share
Tweet
Pin
0 Shares
Guide For Geek Moms