Skip to Content
Share54
Tweet90
Pin62
206 Shares
Forget Elf on the Shelf, this is my version of Grinch on the Shelf!  Meet Grinch on a Stick!
For years now, during Christmas time, I start seeing all the Facebook status’s fill up with pictures of what “Elfie” did last night.  I enjoy them, those Elf on a Shelf lovers sure come up with some creative things!  However, my household has never really gotten into the whole Elf on a Shelf tradition, truthfully because it looked like work and I ain’t got time for all that.  Also, my kids have never asked for one AND have you seen the cost of those Elves these days?!  They are like $30 bucks, I am too cheap for an Elf on a Shelf.  However this year my son started asking for one, I guess the kids at school have been talking about them.  Kids and their bad influences.  So I started looking more into these Elves on the Shelves, I do what I can to make my kids happy. 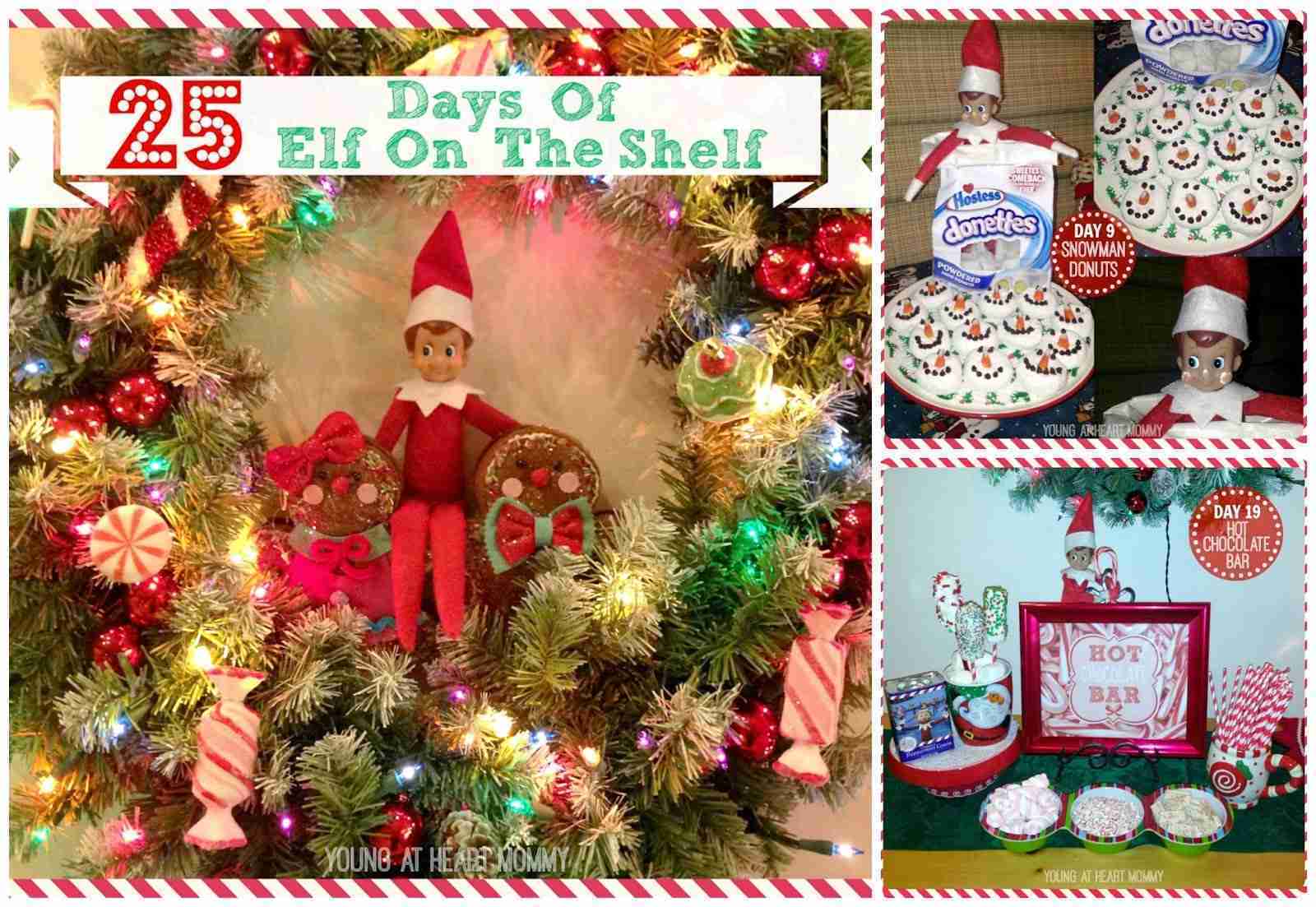 While doing my research, I came across some really awesome blogs that had the most cute and creative Elf on the Shelf ideas.  One of my favorites was from Young At Heart Mommy, she did a whole series 25 Days of Elf on a Shelf with her Elf, Apple Jack.  Apparently, you don’t just call your Elf on a Shelf “Elfie” like I’ve been doing but you give them a name as part of the adoption process.  I am so out of the Elf on a Shelf loop, I really don’t even know how this whole thing is suppose to work.  How did the Elf get here?  Why does he leave presents?  What is the whole role of Elf on a Shelf?!  I had to dig deeper.

Google says:
The Elf on the Shelf story was created in 2004 by Carol Aebersold and daughter Chanda Bell over a cup of tea. Bell suggested they write a book about their own family tradition of an elf sent from Santa who came to watch over them at Christmas time.  The book tells a Christmas-themed story, written in rhyme, that explains how Santa Claus knows who is naughty and who is nice, and describes elves visiting children between Thanksgiving and Christmas Eve, after which they return to the North Pole until the next holiday season.
Ah, I am starting to get it!  How fun!  If the kids were good the day before, they wake up to donuts, hot chocolate and Hersey’s kisses.  But if they were naughty, they wake up to… 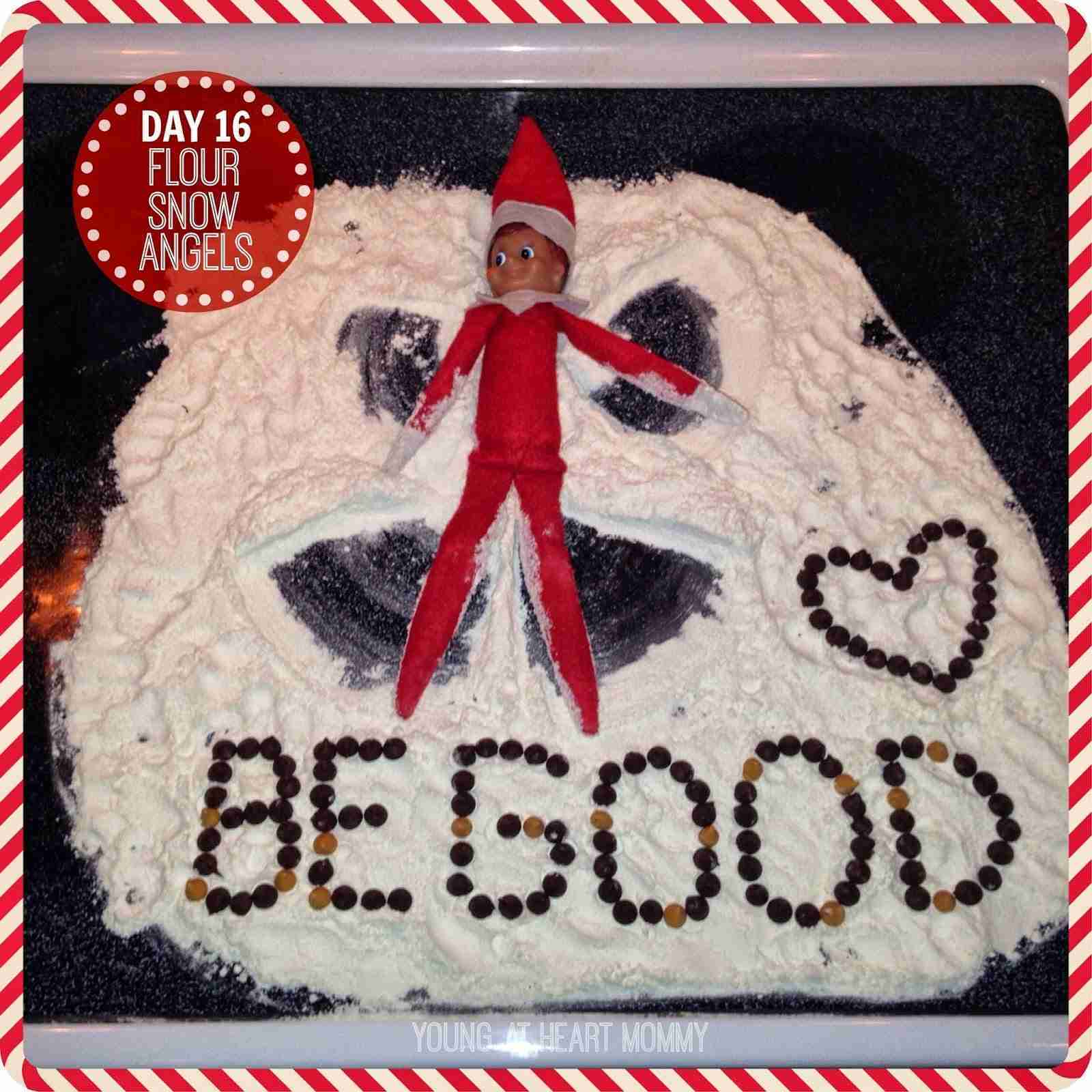 Wait.  What?!  They wake up to a mess?!  A mess I have to clean up?!  This does not seem right.  First of all, this seems like more of a punishment for ME and even if I did trust the kids enough to clean up the mess properly, I doubt this would make much of an impression on them to make their way on the “nice” list.  Nah, a cute little Elf making snow angels is not going to cut it, they need FEAR.  They need a… GRINCH! 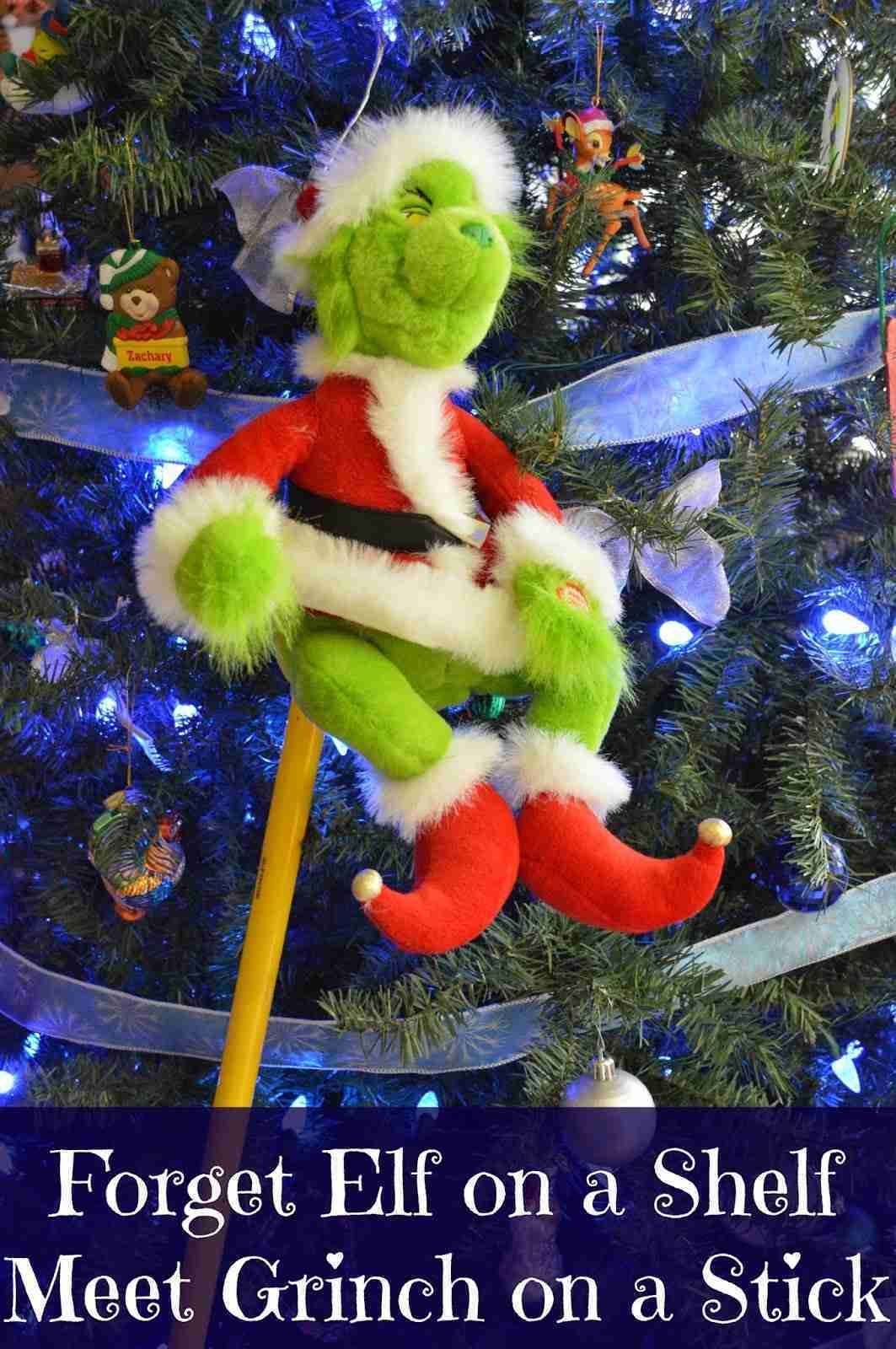 Meet the newest addition to our household, Terror or “T” for short, our Grinch on a Stick.  Grinch on a Stick sort of works like Elf on the Shelf but only Way. More. Effective.  You see, each night the Grinch assesses the behavior of the children, returns to his lair and calculates his revenge plans the appropriate “treat” he leaves for the kids the next morning.  Here are some examples… 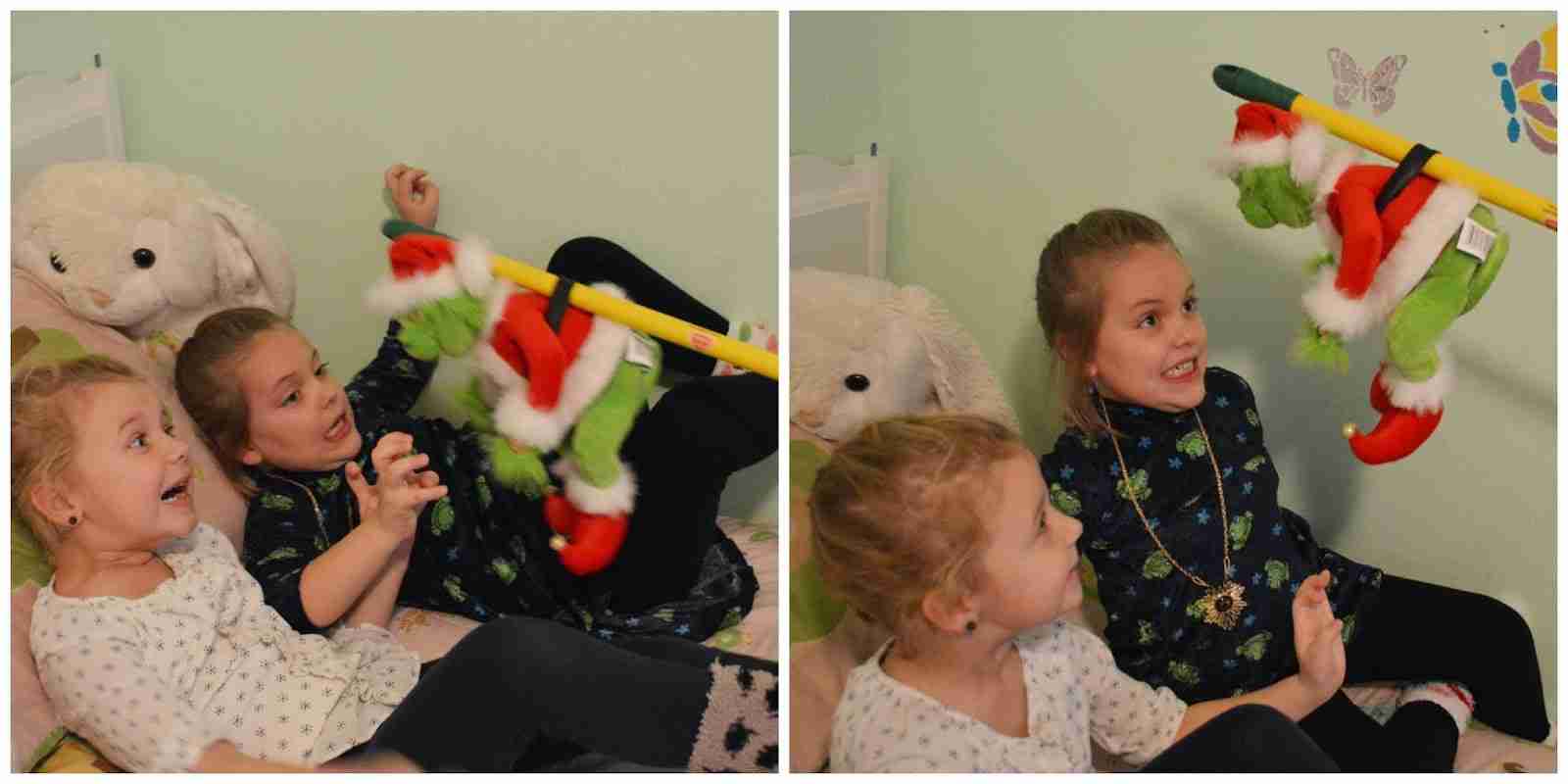 Say your daughter has a sleep over with her cousin.  The two girls stay up until 1 in the morning and basically keeps the entire house up in the process.  What does “T” then do for the girls the next morning?  Scares the hell out of them Gives them a friendly wake up call at 7 AM.  Rise and Shine Suckas! 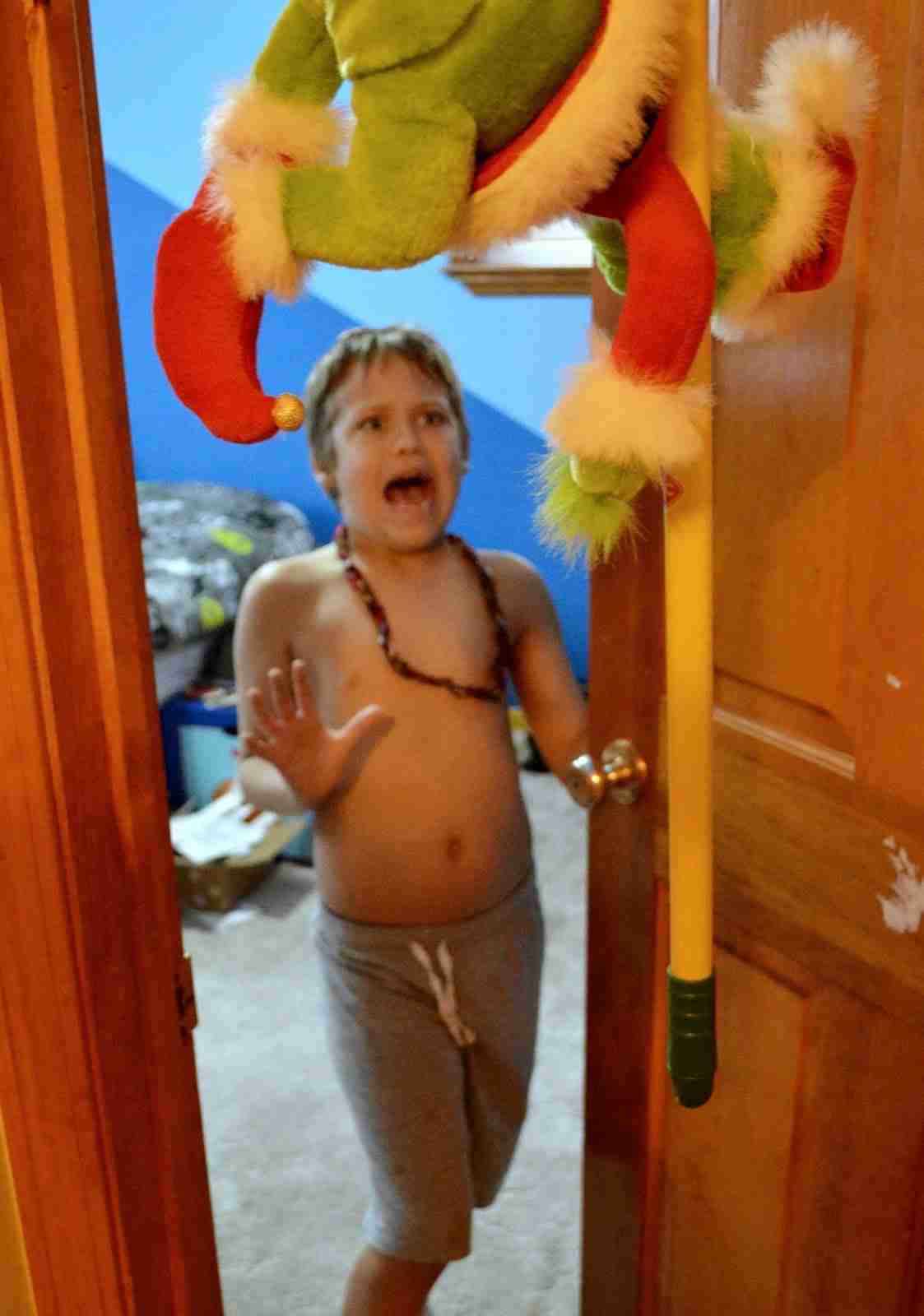 He also likes to give morning greetings to little boys who thinks it is OK to sass their Mom.  Ever opened a door to a Grinch in your face?  It is quite the shocker. 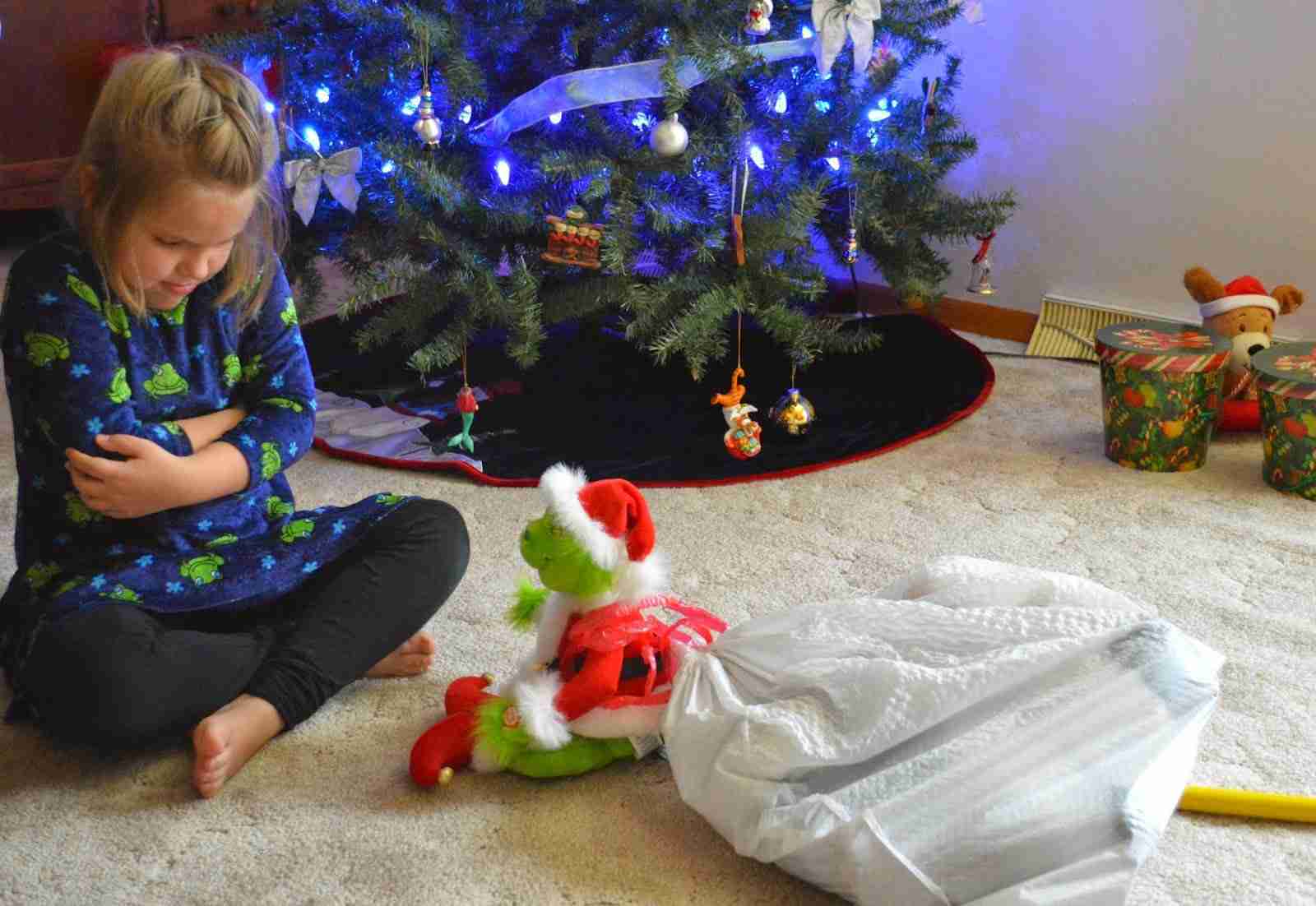 And what does the Grinch do for little kids that do not not to pick up their toys?  He takes them, of course!  Should have cleaned your room like you were told… 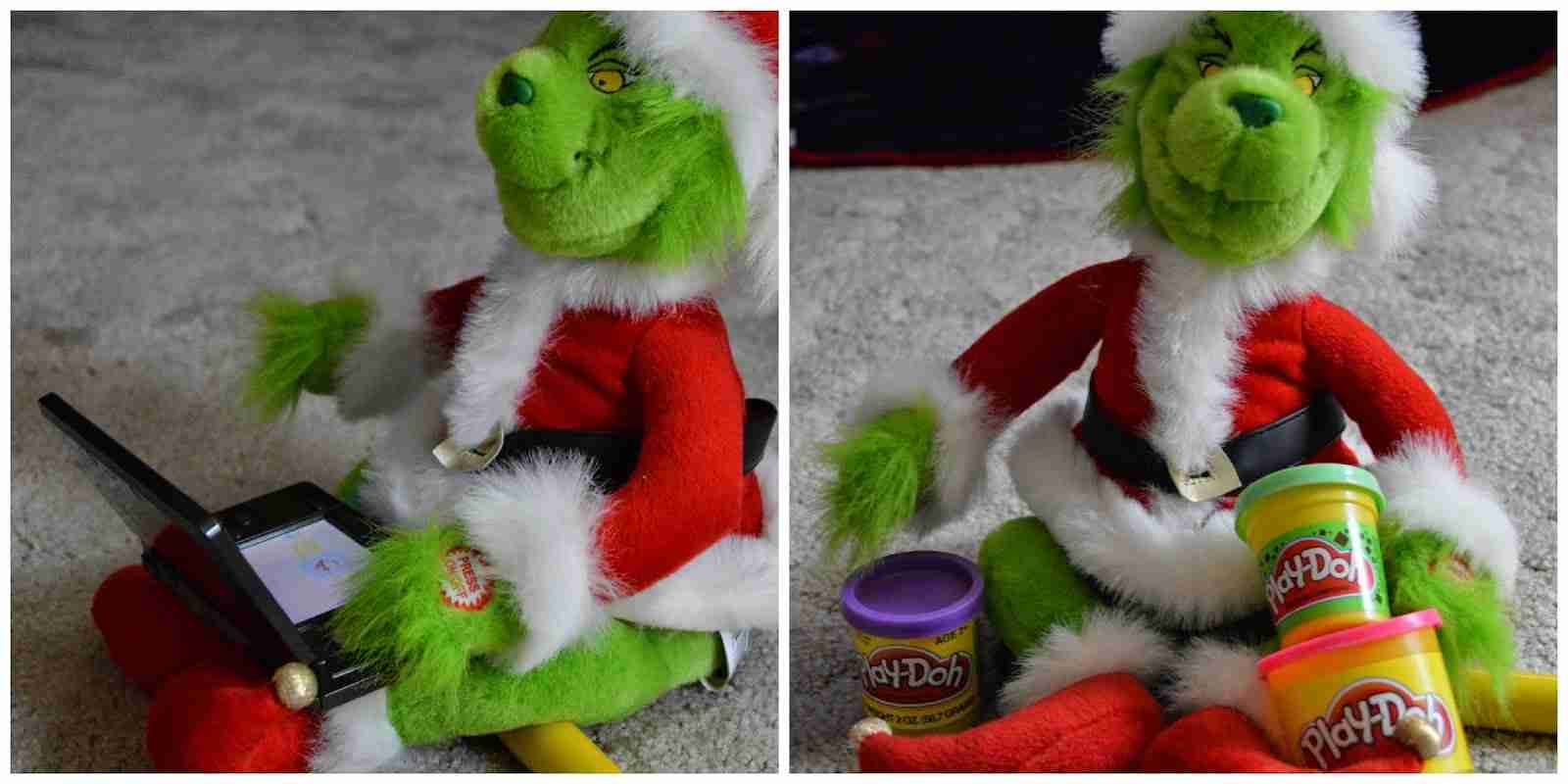 Now don’t get the wrong impression, the Grinch isn’t always “mean.”  Remember the Grinch’s heart can grow.  If your kids do have a day in which he/she makes the “nice list”, good things can happen.  The Grinch might even be so generous that he greets them in the morning with some of the crap toys he took the day before.
So, what are you waiting for parents?  Jump on the Grinch on a Stick bandwagon with me.  You won’t believe the change in your kids!
Share54
Tweet90
Pin62
206 Shares

We too didn't go for the Elf on the shelf. Due to cost and not really liking the mischief he/she can get upto....

:D, that reminded me on the Grinch movie with Jim Carrey. Its a good choice for our kids, who can never clean after themselves.

I need a Grinch on a Stick. I love the idea of giving them back their own toys. I am not about he elf, but I could get into the Grinch