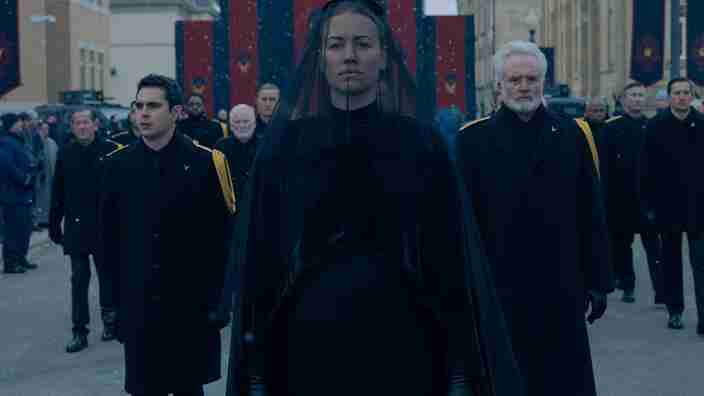 Hulu’s The Handmaid Tale season 5 dropped episode 3 on the streaming service today, September 21st. The second episode ended with the funeral of Fred Waterford and Serena’s little scheme to have the funeral air live, having Hannah make an appearance to get under June’s skin. We have Episode 3 today, and we have the entire recap and review. Check out The Handmaid’s Tale season 5 episode 3 recap and review.

Disclaimer: The following consists of many spoilers from The Handmaid’s Tale season 5 episode 3. If you only wish to read the review, please skip this recap and scroll to the next section.

The Handmaid’s Tale Season 5 episode 3 begins with June still trying to come to grips after seeing Hannah appear on the news. Moira joins her and they both discuss what the purple color Hannah was wearing means. Moira mentions a group of women by the border who could help her make contact and send a message inside Gilead. June meets their contact, the head of this resistance, an ex-Martha called Lily.  Lily is one of the women June traded for Fred Waterford, so she willingly agrees to help June. She leads them out to the woods, right on the edge of No Man’s Land. Lily then shows them around the outpost and discusses the Mayday scheme.

Back in Gilead, Serena meets with Commander MacKenzie, Hannah’s (now renamed Agnes MacKenzie) legal father. Nick and his wife Rose also attend, and they give Serena a gift for the new baby. June Osbourne is discussed at dinner, particularly the fear after she murdered Fred. They believe Hannah’s safety is now in danger. Gilead wants June dead.

Serena wants to stay in Gilead. Mark tells her staying is not safe, especially for an unmarried woman. Desperate to stay, she suggests remarrying Commander Joseph Lawrence, who isn’t onboard with this idea and subtly rejects her. Serena then meets with the council who will decide on Serena’s future. They came to the decision to make her an unofficial global ambassador for Gilead. She cannot stay in Gilead and has to return to Canada. She doesn’t leave totally empty-handed; she will receive protection and her own staff with this unofficial new title.

In another part of Gilead, Aunt Lydia visits Esther at the hospital. She is still alive after an unsuccessful suicide attempt. She then slaps her across the face. Lydia visits Janine’s bedside and promises to turn things around with the Lord and blames her past deeds on what happened to her. She pleads with God to let Janine survive this.

June finally gets Nick on the phone, who explains that the purple color Hannah was wearing means she’s old enough to be a wife and she is now in training to be one. He also tells her he has a wife and makes June promise to stay safe. He tells her they won’t be able to talk again for a while.

The episode ends with Serena being led out of Gilead. June appears at Serena’s window and warns her, “Never touch my daughter again.” Serena has her driver turn the car around.

This episode was all about the shock moments, like Serena slyly proposing to marry Lawrence. And of course, what the series is known for, those cliffhanger endings, where June confronts Serena on her way back to Canada. One thing this show does well is leave viewers each week with plenty to muddle over and discuss over the watercooler the next day. Today’s episode was no exception.

The most intriguing character development thus far is that of Aunt Lydia’s, who has always given such powerful performances over the course of the show. We’ve come to know her care and love for her “girls,” particularly Janine. Her devotion to Gilead and their rules has always trumped this love, but we will see Lydia change her tune.