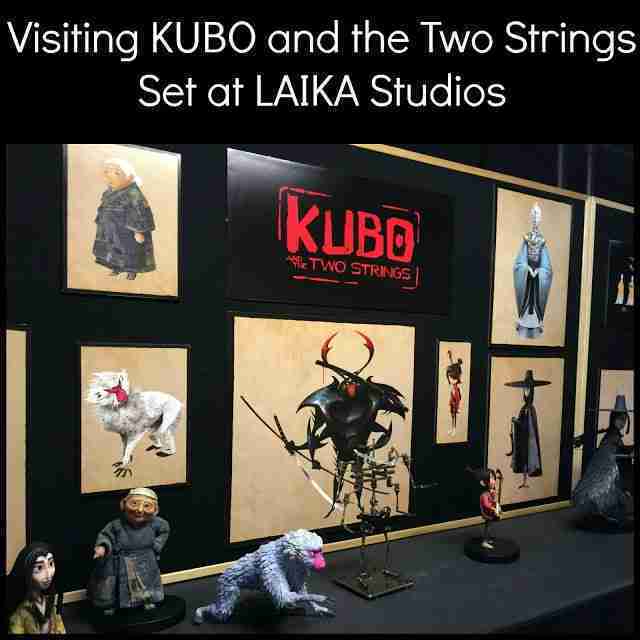 KUBO and the Two Strings opens August 19th!
I’ve been a little antsy this past month.  Ever since I was able to tour LAIKA studios and visit the set of KUBO and the Two Strings in early June, I’ve been itching to talk about it!  However, my visit was under embargo and I had to keep all the awesome-ness to myself.  Well, the embargo has been lifted and I get to share all the knowledge and photos from my trip there!  We will discuss costumes, we will discuss puppets and we will discuss props; “Oh My!”  You can also check out my interview with Director Travis Knight and Producer Arianne Sutner.
Kubo and the Two Strings is an epic action-adventure set in a fantastical Japan from acclaimed animation studio LAIKA. Clever, kindhearted Kubo (voiced by Art Parkinson of “Game of Thrones”) ekes out a humble living, telling stories to the people of his seaside town including Hosato (George Takei), Akihiro (Cary-Hiroyuki Tagawa), and Kameyo (Academy Award nominee Brenda Vaccaro). But his relatively quiet existence is shattered when he accidentally summons a spirit from his past which storms down from the heavens to enforce an age-old vendetta. Now on the run, Kubo joins forces with Monkey (Academy Award winner Charlize Theron) and Beetle (Academy Award winner Matthew McConaughey), and sets out on a thrilling quest to save his family and solve the mystery of his fallen father, the greatest samurai warrior the world has ever known. With the help of his shamisen – a magical musical instrument – Kubo must battle gods and monsters, including the vengeful Moon King (Academy Award nominee Ralph Fiennes) and the evil twin Sisters (Academy Award nominee Rooney Mara), to unlock the secret of his legacy, reunite his family, and fulfill his heroic destiny. 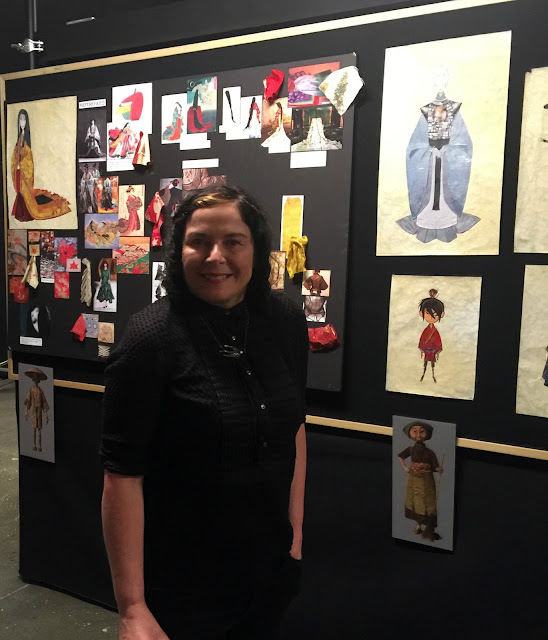 Deborah Cook, Director of Costume Design, spoke of the huge undertaking it was to design the costumes in KUBO and the Two Strings.  The clothing consisted of Japanese inspired pieces, such a kimonos, which are vibrantly colored and “flowy” but the costumes in a stop-motion movie cannot consist of such easily move-able material. 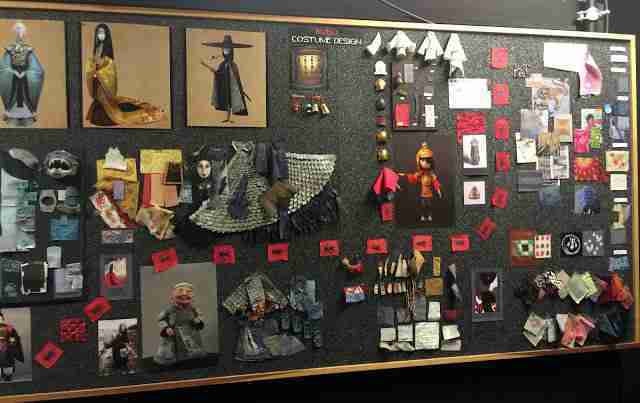 They wanted the material to be flat, stiff but also appear to be a “flowy” garment.  It sounds like an oxymoron, doesn’t it? But to create this look, they had many tricks up their sleeves.  Get it, “sleeves”? 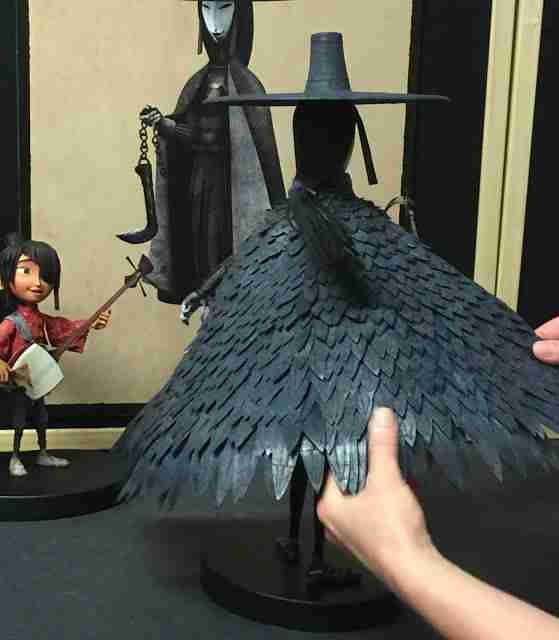 Some outside the box thinking and ingenuity was used in making The Sisters’ cape, which is to look like feather-like wings.  The cape is made of a woven frame-work of piano wire, which has a spring to it, and when its woven together it slides on itself.  The piano wire, along with the combination of 183 feathers that were stitched on to the outside of the framework, creates this cape with stretch and every shape it creates keeps its form and looks like wings. 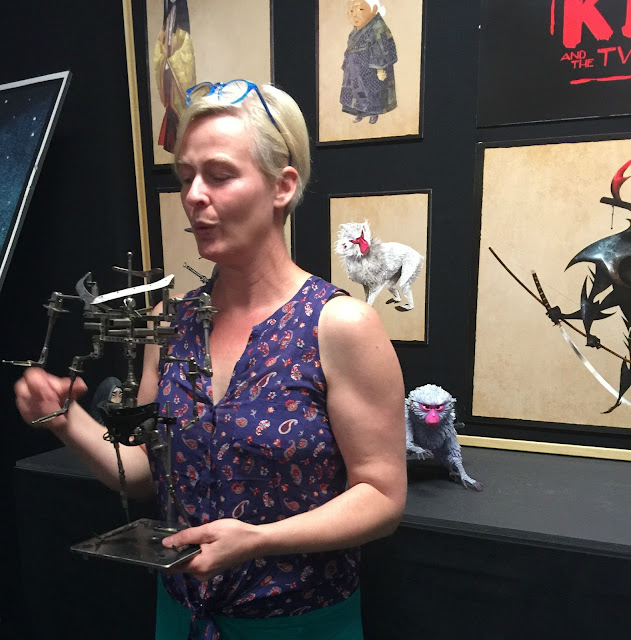 Georgina Haynes is the Creative Supervisor of Puppet Fabrication at LAIKA.  Her job mainy consists of taking the directors vision, the animators needs and turn a static image into a fully animate-able puppet.  It’s not as easy as it sounds and it certainly doesn’t sound easy!  She doesn’t do it alone, she has a group of 65 artists, some of the best puppet-makers in the world, that help her achieve these master-pieces you see on screen. 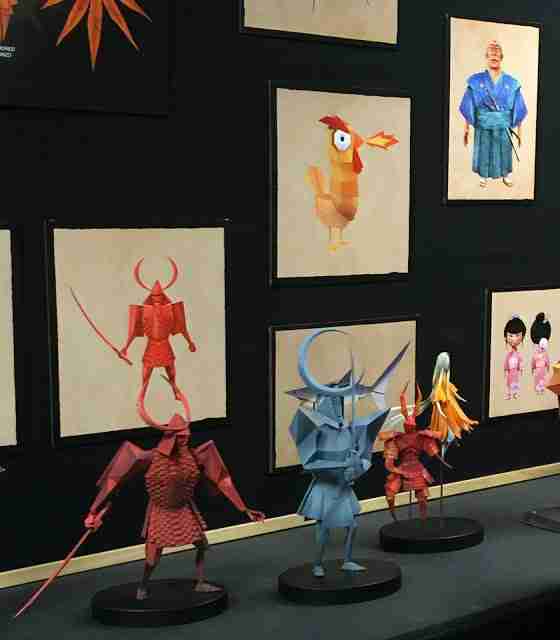 The first step in building an animate-able puppet starts with building a marquette, which is a static sculpture that serves as the style guide.  After the marquette is made, a huge meeting occurs with the director, head of animation, the head of the puppet department and the heads of other departments.  This meeting is sort of a fact finding meeting where they learn more about the characters needs, their movements, their personality, and from the onset, they try to put as much into the puppets as they can.  The first puppet will have all the bells and whistles and they simplify from there.
The parts of the puppet are cast using silicon, foam latex’s and rubber materials.  The armature department creates the internal skeleton, which allows the animator to move the puppet frame by frame.  Every puppet has an armature inside it.  It’s all about working out what you need for each puppets movement.  The puppets will then go on to set with the animator. 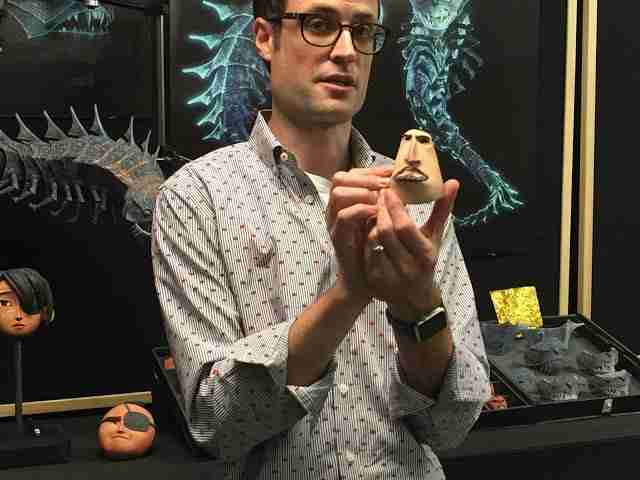 Brian McLean is the Director of Rapid Prototyping, which is the department that creates all the faces of the characters.  They actually use a 3-D printer to produce all the faces.  LAIKA was the first studio to start using this technique when working on the movie Coraline. 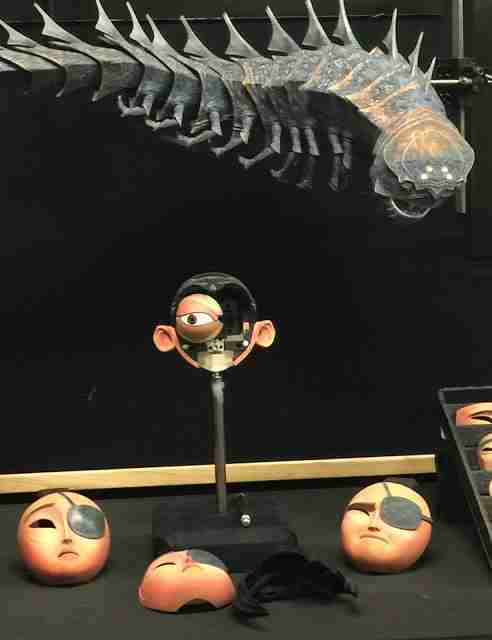 The face animation used in stop-motion comes from a 100 year old technique called “Replacement Animation”.  Its when you have a sculpture, typically hand-sculpted sculpture, a photograph is taken of it, removed and replaced with a slightly different sculpture.  When you combined all those photographs together, you get a sense of movement.  So, they took that idea and fused it with 21st Century 3-D printing technology. 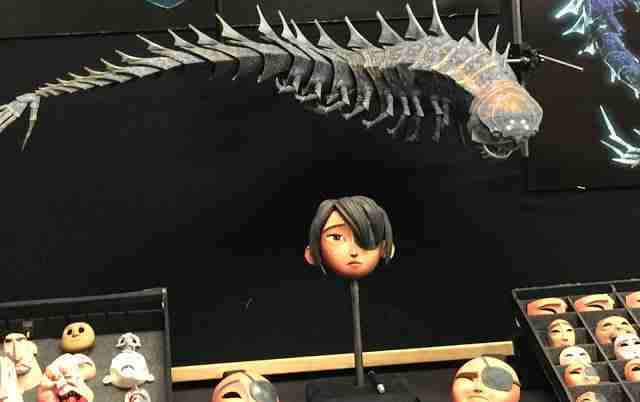 The Rapid Prototyping Department at LAIKA is making a name for themselves in the movie making industry and also the 3-D printing industry.  Four months ago they were nominated and won a Technical Oscar.  Because they are using 3-D printers as a mass production tool and pushing the machine to worlds the company never dreamed of, they are able to work very closely with the 3-D printing companies.  In fact, they had access to a new color 3-D printer that was printing in plastics, and were able to utilize this printer even before it’s release to the public.  In turn, they helped develop software for the printers.  Beetle and Monkey are one of the first characters that were ever 3-D printed in color plastic. 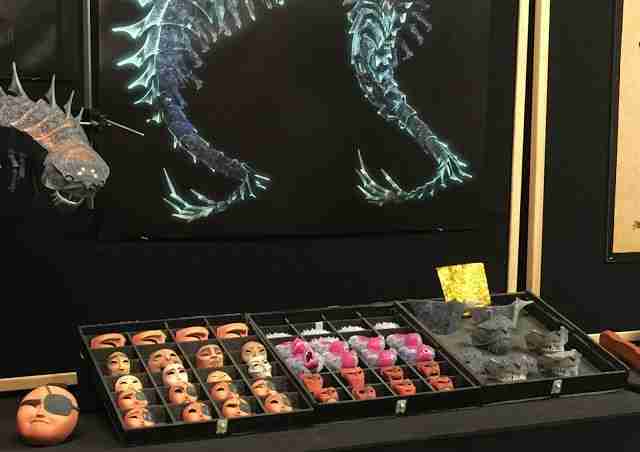 For Kubo 66,000 faces were made, giving him a HUGE amount of possible facial expressions, 48 million to be exact.  This amazing technology helps bring to life the characters in this film.  You are lost in Kubo’s world and completely forget he is a puppet! 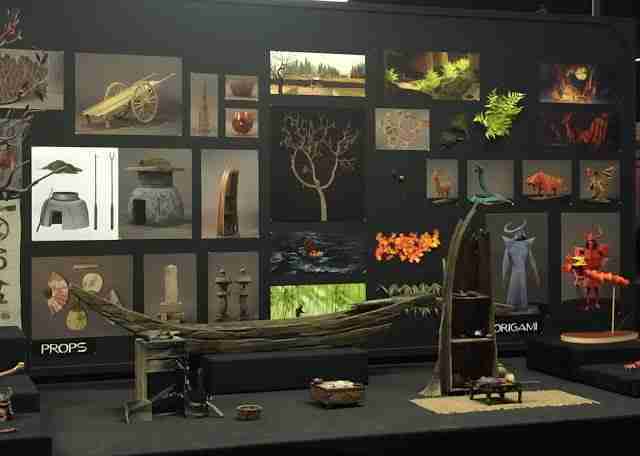 Last but not least, we took a tour of the props used in the making of KUBO and the Two Strings.  The props department consists of art directors, set designers, shop teams (set shops and miniature model shops), greens department (in charge of landscaping), and the paint department.  So, if you are a model maker you are not seeing the prop from the beginning to the end, you do your part and hand it off to someone else. 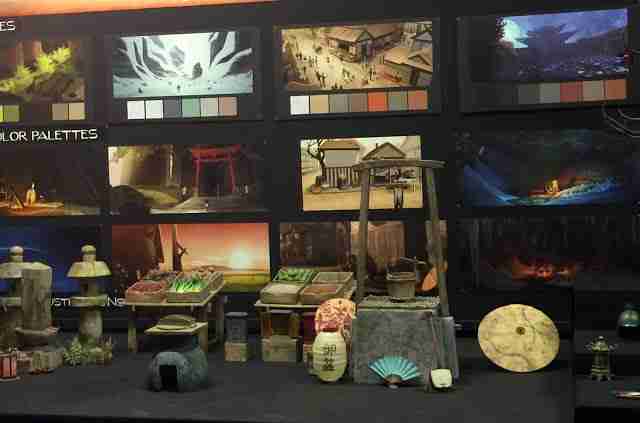 Everything that is not a puppet in the film is built in the Props Department.  Each movie has such a unique look and style, they can not reuse the props from previous films. 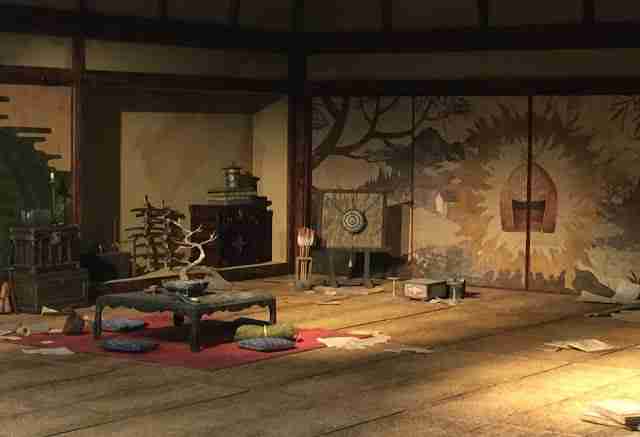 The pieces are scaled to size to fit the character and are only a few inches tall, or smaller.  The detail and craftsmanship in the props are simply incredible. 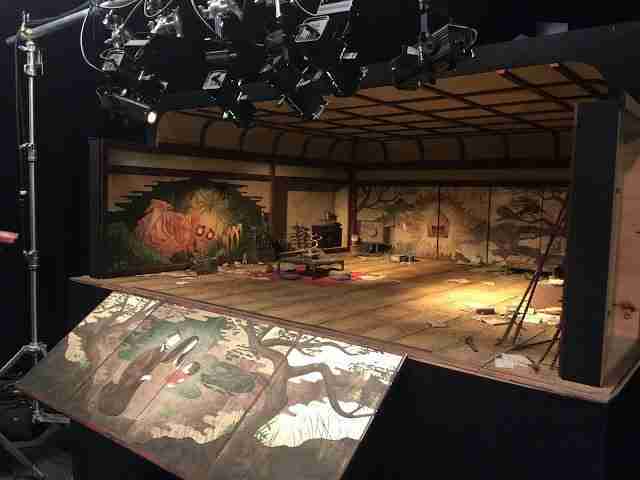 The combination of costumes, puppets, expressions and props; is one of many parts which make this film extraordinary.  I can not wait for it’s release August 19th and I can not wait to share even more details of my visit!
This week, I am also attending the KUBO and the Two Strings press junket in LA.  There I will interview the stars of the film which include Matthew McConaughey and Charlize Theron, along with Director Travis Knight and finally get to watch the film in its entirety!  Follow along 7/7-7/9 #KUBOMovie
Share82
Tweet
Pin82
164 Shares

Kubo and the Two Strings Opens in Theaters: Movie Review

[…] Artistry   Back in June, I had the opportunity to visit LAIKA Studios and see first hand the making of a stop-motion film.  It is unbelievable the amount of time, […]

[…] with Travis Knight, CEO of LAIKA Studios and Director of the new KUBO and the Two Strings.  After visiting LAIKA Studios myself back in June and seeing first hand what goes into making a stop-motion film, I was in awe […]