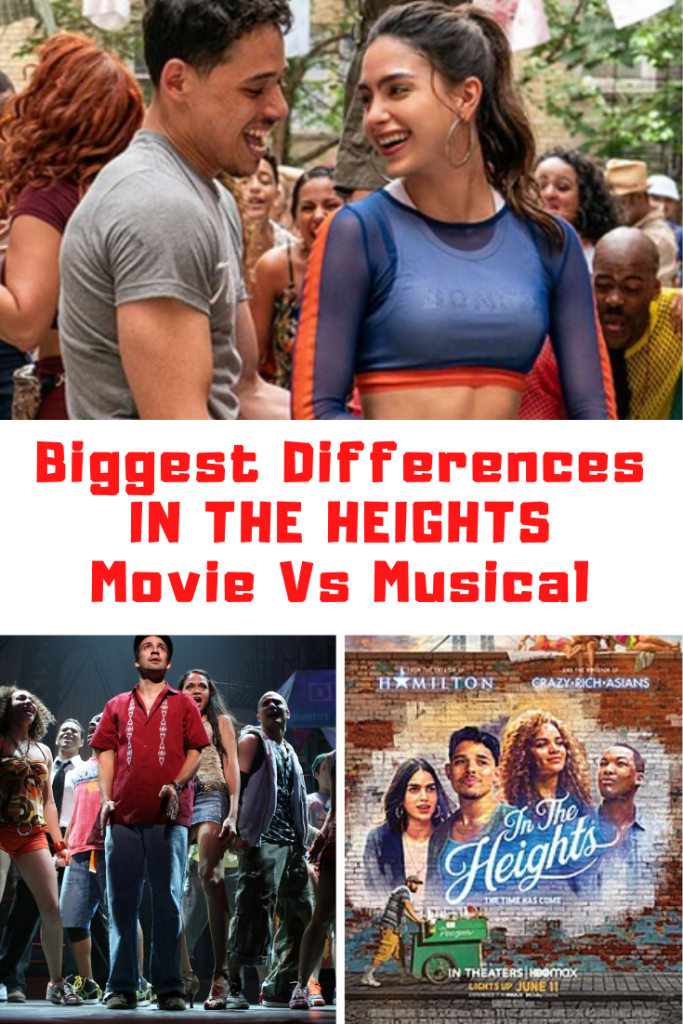 Differences In The Heights Movie Vs Musical

There are some big differences as far as characters and story-line in the new In The Heights movie which is based off the popular Broadway musical. Lets us first discuss the character differences.

In the movie, Nina was raised by her father Kevin and her mother passed away many years back. Nina had dated Benny, who works at her dads car dispatch company, but the two broke it off before she went off to college.

In the Broadway musical however, Nina has a mother and there is a lot of tension between Benny (Nina’s love interest) and Kevin (Nina’s dad) because Benny isn’t Hispanic. Benny is black in the movie, which stays true the the musical in that way, although the fact that Kevin is upset he isn’t Hispanic is not a thing in the film.

Also in the Broadway musical, Nina gets mad at her father and sneaks off with Benny, there’s a fight over the car dispatch a tension In The Club before they kiss. Nina then she stays out all night with Benny and teaches him Spanish, showing his desire to be part of the community. Of course, none of that happens in the film.

There is a fight In The Club in the movie, however the fight occurs between Usnavi and Vanessa. So the song stays pretty true to the lyrics, except for the part about looting the store. There’s no looting in the movie. There is also a fight over the car dispatch and Benny does get mad at Kevin but it is for entirely different reasons in the film.

In the musical, Nina does not change her mind about going back to Stanford, which she doesn’t want to return to.  However in the film, Sonny takes Nina to a DACA/Dreamers protest which changes her mind about returning to school.  The protest and political scene does not happen in the Broadway musical.

The $96,000 song Benny sings in changed up a bit in the movie. It was originally sung as Donald Trump being his caddy but in the film it is Tiger Woods.  And what happens with the $96,000 in the film verses the musical are completely different.

Songs Cut From In The Heights Movie Vs Musical

There are many songs cut from In The Heights movie vs the musical and some of the songs have been modified, as I stated a few of those changes above, such as pieces of “In The Club” changing for the movie.  Below is a list of the songs cut from the film.