GOOD LUCK TO YOU, LEO GRANDE is a touching, feel good story that breaks the taboos surrounding sex. Check out the details in my parents guidemovie review. 2022 Sundance Film Festival. 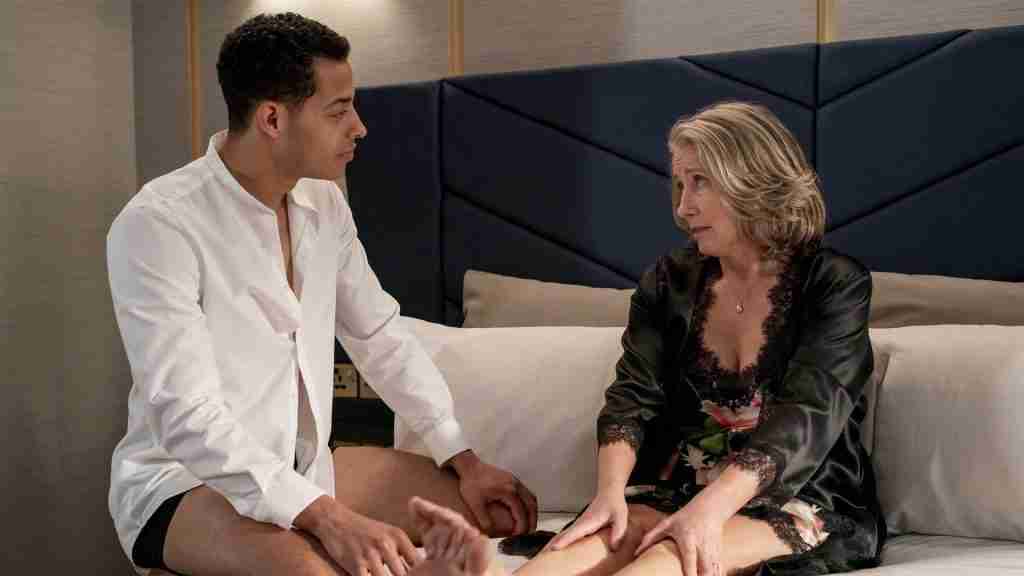 Good Luck To You, Leo Grande premiered at the 2022 Sundance Film Festival this week. The film stars Emma Thompson and Daryl McCormack and is an intimate comedy about genuine human connections, sex postivity, and female pleasure. Good Luck to You, Leo Grande strikes the perfect balance between unapologetic humor and an earnest study of the art of (self-)acceptance. Check out the details in my parents guide movie review.

Nancy Stokes (Emma Thompson) doesn’t know good sex. Whatever it may be, Nancy, a retired schoolteacher, is pretty sure she has never had it, but she is determined to finally do something about that. She even has a plan: It involves an anonymous hotel room, and a young sex worker who calls himself Leo Grande (Daryl McCormack). Leo is confident, dapper, and takes pride in being good at his job. He also appears to be intrigued by Nancy — one of many things to surprise her during their time together.

Let’s take a look at what parents need to know before letting their kids watch Good Luck To You, Leo Grande.

Mature Content: The biggest warning in the film, other than the profanity, is the sex and nudity content. The first 75% of the film does not show any sex or nudity, but the characters discuss sex, sexual positions, oral sex, orgasms, and plenty of implied sex. The final act of the film makes up for both the lack of nudity and sex scenes. There is a whole sex montage of characters having intercourse in various positions. A full frontal nude scene of a character and the penis shown to another. Characters also consume alcohol in the film.

The first half of Good Luck To You, Leo Grande felt very much like Malcolm and Marie in terms of the entire movie taking place in one central location and centering around two main characters. The film is heavy on dialogue and gives an in-depth take on the psyche of an elderly female, Nancy (played by Emma Thompson), who has repressed her sexuality her entire life. While the film highlights the evolution of Nancy’s character, it also delves into the mind of a sex worker and their motivations behind choosing such a career.

Emma Thompson was by far the best part of Good Luck To You, Leo Grande. At the age of 62, Thompson completely steps out of her comfort zone and audiences have the pleasure of witnessing her embrace her sexuality. Thompson fully embraces her character, so much so that there is a full-frontal scene of her in the film. In a way, Good Luck To You, Leo Grande is a story about female empowerment that Thompson has gone through in her own life, as she has admitted she would never have been able to do such a nude scene in her younger days. Daryl McCormack co-stars alongside Thompson as the very charming and attractive sex-worker, Leo Grande. McCormack totally shines as the witty and empathetic Leo Grande, whose chemistry with Thompson feels authentic, natural, and steamy. The two seem to play well off each other, and the friendship they develop as the film progresses seems believable. The age difference between the two at first stark, begins to melt away as the film progresses, and you realize that human connection can easily transcend these tropes. A powerful message for cougars and those that feel uneasy in their own skin.

Good Luck To You, Leo Grande will charm audiences with its sweet story and body empowerment.

Good Luck To You, Leo Grande Rating: 3 out of 5

Good Luck To You, Leo Grande played at the 2022 Sundance Film Festival