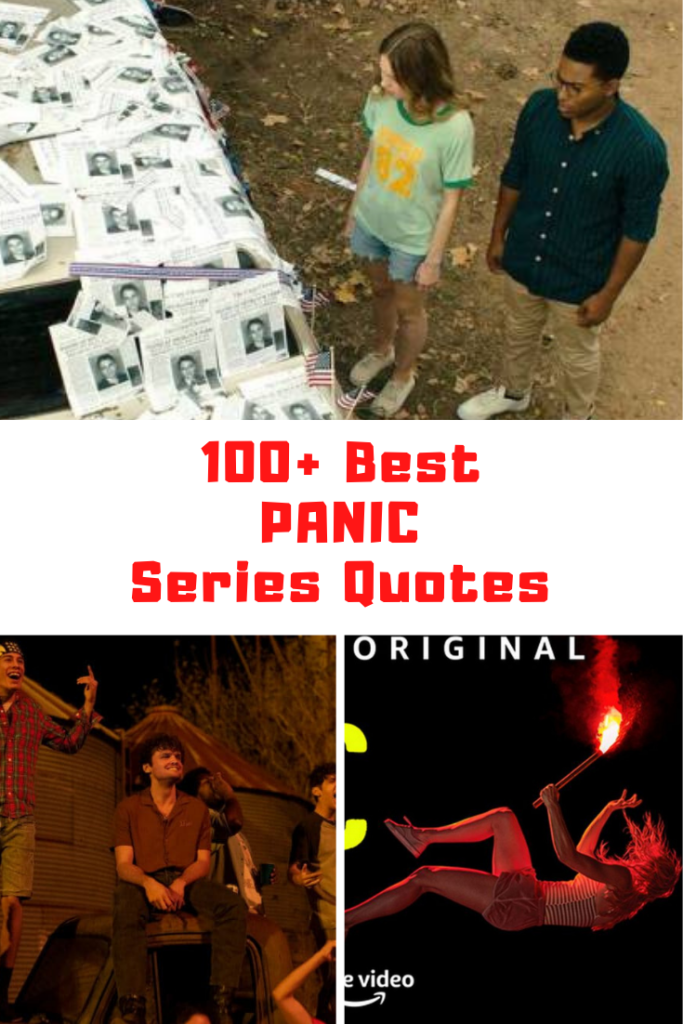 Amazon Prime Video PANIC dropped on the streaming service this past Friday, May 28th. The series is a suspenseful thriller that will keep you on the edge of your seats and guessing the entire time. I will have a review coming soon, make sure to stop back by to check it out, it will be linked down below. In the meantime, I wanted to share a list of some of the best quotes. I love me a good line and this series had some great one. Check out this list of 100+ best Amazon Prime Video Panic quotes.

Every small town has a secret, ours has a game.

That’s why players risk their lives to win.

The game isn’t meant to kill you and it won’t if you follow one rule – don’t panic.

The game has a ghost too.

I am so done with this place.

There’s a few things I don’t want to remember.

He said they could afford to keep me.

Carp is actually the capital of nothing.

I don’t want to watch, I want to play.

For a drug dealer, you are pretty terrible at handling drugs.

I just don’t want you to play.

You stole my money.

There is no together in Panic. It’s you or me, one winner only.

I’ve got nothing to lose.

The girl was lonely. 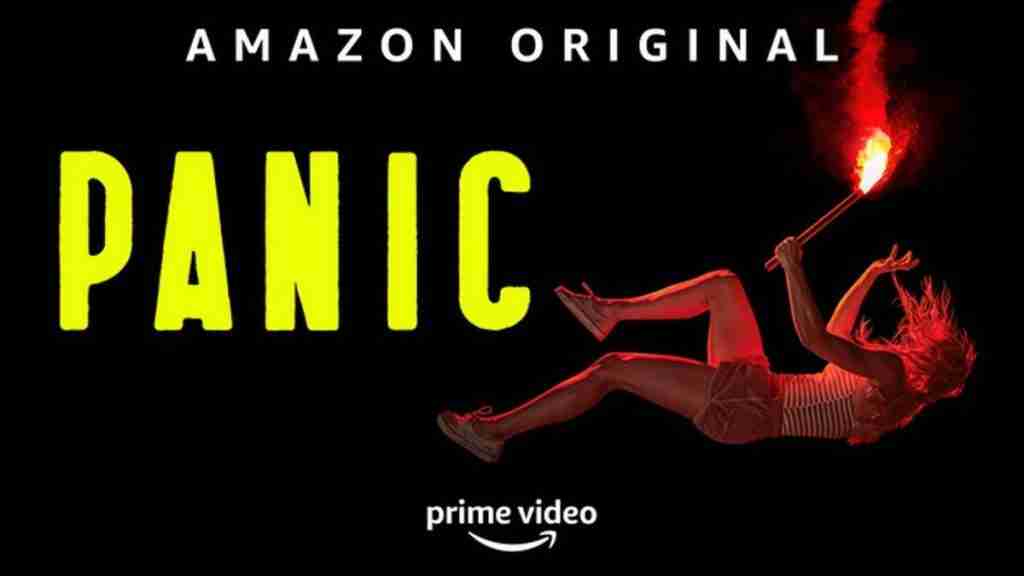 So the wind opened its arms and the girl madeof dirt turned to air and flew.

Every player has a story, some of them are even true. Every player is hding something, secret cells, secret habits, secret shame.

We’re all afraid of something but they are never the things we say out loud.

As long as you keep moving, your fear always stays behind you.

Anything you do before Junior year can’t be legally used against you.

At the end of of the day you either have a kid that’s breathing or you don’t.

The threats pushed her over the edge.

Where did you get that tatoo on your hand?

They found his guts coiled around the old machinery.

At the end of the day you either have a kid that’s breathing or you don’t.

Even if you stop this game and you bring it all down if you could, it’s not gonna bring Jimmy back.

There is only one reason she stepped onto the highway, the threats pushed her over the edge.

He told me to notice things that people don’t see.

She won’t seem like just a friend for too much longer.

Since the cops busted us, no more spectators.

I don’t want to point out the obvious but I’m actually the one that’s winning.

You can’t run. You can’t hide.

Don’t forget, you gotta be firm with him. He’s gotta know you are the one in control.

Just remember, you are nobodys maid.

You’re not going to end up like I did.

You are like my brother, the idea of kissing you is tramatizing.

It looks good on you. Of course it would look better on my floor.

I laugh when I think things are actually funny.

Do you have any feelings at all, that don’t come straight from your penis?

You are the one crying in the parking lot.

It doesn’t matter that you are pretty, I don’t care. I saw you fly.

Legend has it that 100 years ago there was a man named Samuel Graybill, who was the richest man in Texas.

Graybill’s ghost curses all lovers who enter the house, and they will hear the bells ring before their beloved one dies.

Look at you all dolled up.

A lot of the young people around here, they seem rather lost.

In the real world, you have to be realistic.

Make your own reality, kid.

Judges are allowed to play?

The final four are what matter tonight but for now they are beside the points.

Panic is a game about fear. But it is also a trick. Win as many challenges as you want, but real fear happens when it’s not a game anymore.

If you cut a deal with the judges, then you’re already in trouble.

We’ve come this far as a team, we can do this. 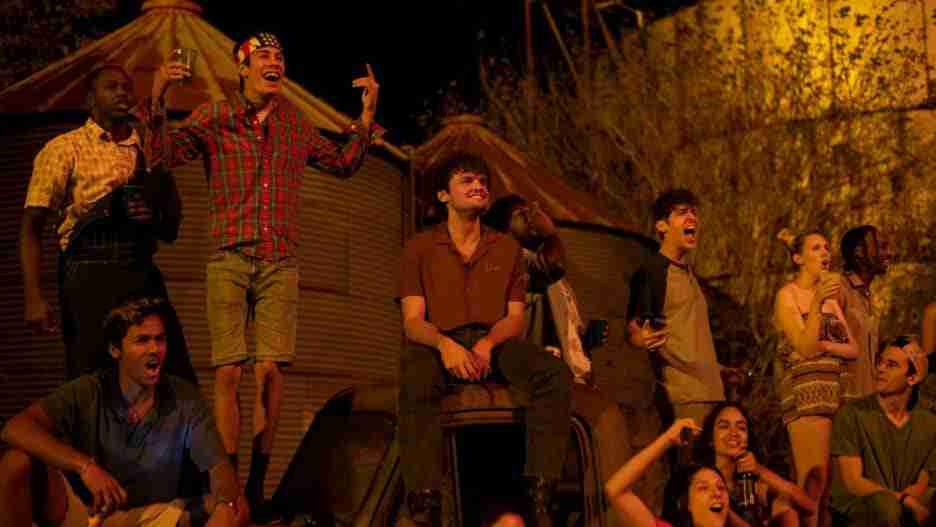 These gates have to stay closed at all times. Understand that?

Once upon a time there was a girl made of stories, who didn’t have anything to believe in.

It was Jimmy who switched the gun himself.

People tell lots of stories about how Panic began. But none of them matter. What really matters is how it ends.

I don’t know what to believe. But that is the difference between you and me, you have it all figured out, don’t you?

May we always be scared out of our f*cking minds.

Natalie is one of the judges.

You Hall brothers have a history of getting into trouble. Careful you don’t go looking for any.

Our sisters are okay, that’s what is important.

Everything that you have said has been nothing but a lie.

I have proof from that night.

Never trust a rich kid to be the bag man.

Everyone has a reason for playing Panic but we all have the same fear. That we’re heading nowhere but a dead end. That’s why Panic ends on the road. That’s why the final challenge is Joust.

He outplayed us. That’s what happens when you get to write the rules.

How far would you go for your child?

Figure out what it is that you’re really scared of. Something you can’t run or jump or climb your way out of no matter how hard you try.

If you run, it will always catch up with you.

I’d start by changing your story.

I’m sorry for what happened to your sister but it wasn’t my brother who hit her.

Ya’ll be careful, there’s a tiger on the loose.

This has to end tonight.

Were you really planning on blowing yourself up with Cortez? Or was that bomb under my car a little Christmas decoration?

Once upon a time, there was a girl who believed learning to fly meant she could escape her own shadow. So she jumped hoping she could grow wings.

The opposite of fear isn’t courage, it’s believing. And finding something worth believing in.

Some beautiful is nice to look at. But there is some beautiful that makes you feel like you’re flying. And it hurts. Cause for a second you forget that it’s leaving you behind.

I’m a Hall. I’m dead weight. And that’s bad news for a girl with wings.