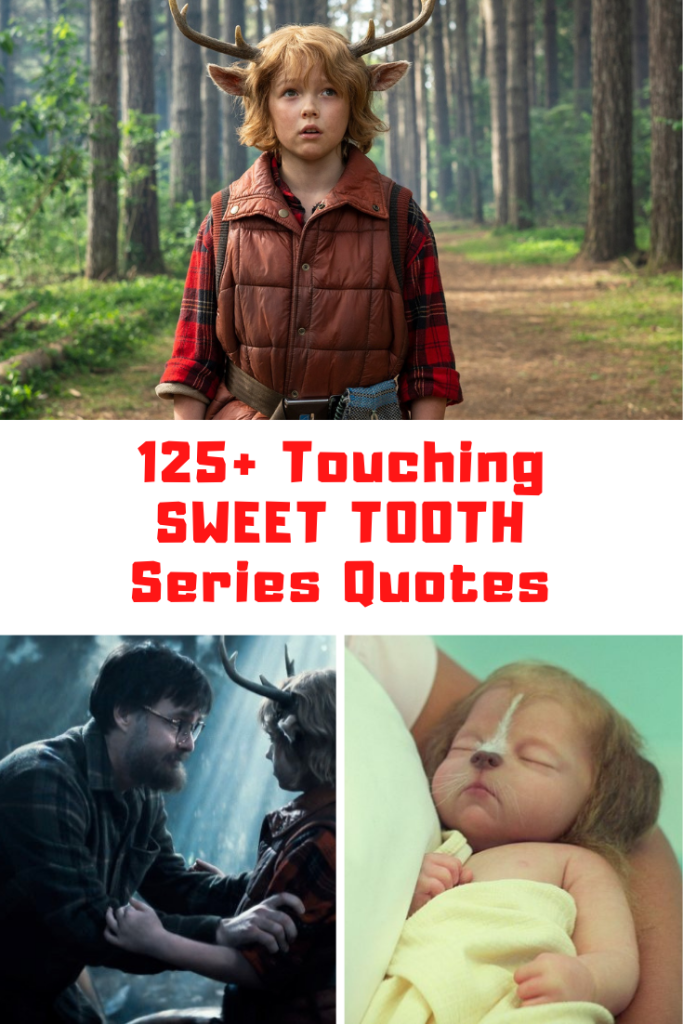 Netflix’s new series Sweet Tooth, which is based off the popular comicbook of the same name, comes to the streaming service Friday, June 4th. I will have a review of the series coming soon, make sure to stop back by to check it out, it will be linked down below. In the meantime, I wanted to share a list of some of the best quotes from the show. I love me a good line and this one had some truly touching ones. Check out this list of 125+ of the best and most touching Netflix Sweet Tooth quotes.

This is a story, a story of a very special boy who found himself at the end of the world.

We have to go back before the Great Crumble.

There was nothing normal about the sick. And life would never be normal again.

But while the doctor faced the horrors of the city, a father was escaping to the wilderness to leave the world behind.

As the world slipped into chais, something else was happening. Something extraordinary.

No one knew which came first, the virus or the hybrids.

As much as the father tried to keep the dangers of the world out, the outside world had a way of sneaking in.

Theywere greedy things, self destructive, only out for themselves. So nature made everyone sick and wiped away as many as she could.

The father decided some of the boy’s questions were just too hard to answer.

By his 10th winter, the boy was now the man of the house.

As his antlers grew, so did his immagination.

Sometimes all a boy has is his immagination.

I’m coming for you, Birdie.

I ain’t never seen a deer one before.

They don’t make them bigger than me.

Go back to the fire where you belong. 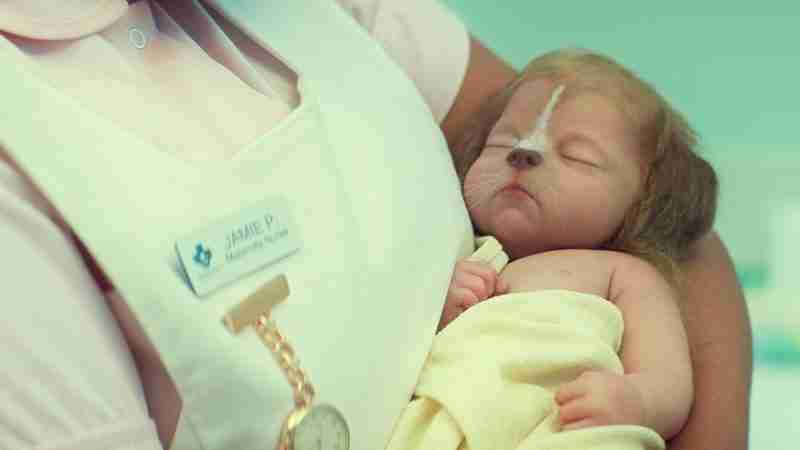 People out there hunt kids like you, don’t make it easy for them.

The boy broke his father’s rules slowly, and then all at once.

You can’t know Gus’s story without knowing Aimee’s too.

The end of the world has a funny way of making connections.

Aimee lived inside a cage, the cage of a mundane life. And that cage was about to get smaller.

Just when she thought that the world had locked her away for good, nature had another idea.

For the first time in Aimee’s life, she felt awake.

Some stories start at the beginning, Aimee’s story begins here.

Somewhere far out in the deep, deep woods, fate was bringing all our stories together.

You don’t have to help me look for her. I can do it on my own.

For the first time in his life, Gus was on a real adventure.

Great leaders are created in the most unexpected of places.

For Gus, he was just happy to have someone to guide him.

I eat a lot of Wheaties.

Some people are just born lucky.

Don’t ask questions you don’t want the answers to.

There hasn’t been a new wave of the Sick in years.

Don’t do any weird deer sh*t.

I’m just a regular human boy, I can talk.

Those men, they have lots of your candy in those boxes.

Get your d*mn ears under control.

Great leaders are created in the most unexpected of places. But the worst, they are made the old fashion way.

I’ve been trying to get rid of him for days.

Sweet solitude, that’s all Aimee Eden thought she wanted. But that was before she met someone worth more than all the solitude in the world.

I was the very first member of the nimal army because I created it.

We’re looking for family from the moment we are born. Turns out, we just don’t know where we’re gonna find it.

Sometimes our families end up looking nothing like we thought they would.

Sometimes we do things for family that we never thought we could.

Family is always worth it.

Some say there is no great equalizer than Father Time. That’s because of one simple thing. No matter who you are or where you go, well, let’s just say ol’ Time’s got a knack for catching up to us all. 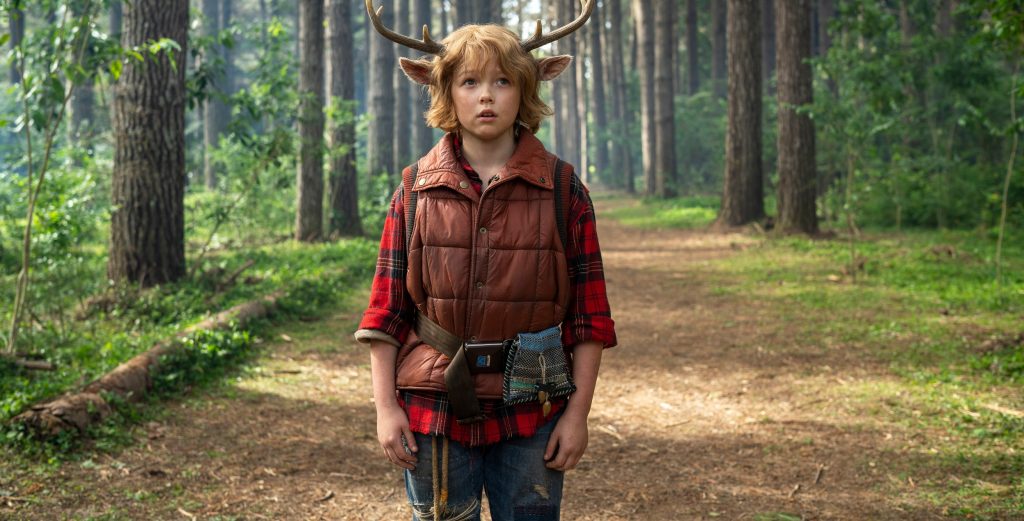 They are gonna be around long after you’re gone, no matter what you do.

Time’s funny that way, a constant companion, until it’s not.

I don’t have to define anything to you.

Last I checked, you were part animal too ya know.

You are perfect the way you are.

I broke your rule.

I knew you’d cross the fence sooner or later.

We don’t always know what’s right. You just gotta do what feels right in here.

Don’t leave me. Come back.

So nice to meet you, Gus.

While wickedness crawl the land, happily ever after remained just out of reach for some.

Can’t solve every problem with fire.

If there is another wave of this thing coming, we’re gonna need you Pal.

Mind telling us what’s in the freezer?

There are moments in our lives where life is kind to us, where we are given an extra second, an extra minute, an extra moment with the ones we love.

And sometimes, it’s like I said, time catches up to us.

The past is a funny thing. We like to hold on to it so tight but sometimes it is better to let go. Sometimes we just gotta move on.

And sometimes, well, sometimes the past won’t let go of us.

If you want the cure, you’ll have to let both of us go.

I think he went looking for Dog.

Doesn’t sound like the Jepp I remember, it use to be all about you.

No matter what happens, you’ll be strong. Because you are Wendy, you are my daughter.

I just want to let you know. I let your horse go. She’s free.

But the thing we don’t always realize when we let go of something, it opens up a little space to grow. It shows us who we are, what we’re capable of. We find out what really matters and who we really were all along.

I spy with my little eye, something that begins with the letter E.

In life you are always searching for answers, ‘Where do you come from?’ ‘Where do you belong?’ But most importantly, ‘Why are you here?’ For some these answers come quite easily. For others, they have to search the ends of the earth to find them.

Sometimes you just gotta hang it up and see what tomorrow brings.

Everyone swears that’s where the virus first started.

Exactly, you are nobody so they won’t come looking for you and you can keep Gus safe.

I don’t know anything about saving the world. 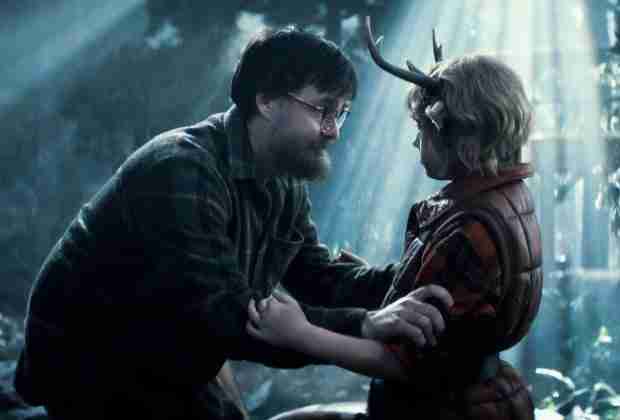 It seems like these Scientists may have created you.

If Scientists created me, I don’t have a mom, do I? Or a dad.

And when the answers you have been searching for are finally revealed, so is your purpose. But sometimes, well, sometimes the truth hurts. And sometimes those answers leave us more in the dark than ever.

The Great Crumble happened slowly at first. But the cracks had been forming for some time.

You can’t fix everything by knocking heads.

The thing that should’ve brought us together only pushed us further apart. We felt scared. We felt alone.

I didn’t have test tube baby on my Bingo card.

I’ve spent my entire life thinking hybrids were a miracle of nature. I formed an army thinking it too.

Atleast you believed in something.

Whatever it is you’re selling, the answer is no.

Nature doesn’t want us back.

What kind is it? Your baby, what kind?

You’ll be surprised what you are capable of when it is someone you love.

I once heard her say there are two sides to every coin but I don’t know much more than that.

I wasn’t afraid of him. I was afraid of me. I think that fear was love that I didn’t know what to do with. But he needed me, so I stopped running, I turn around and I went back to get him.

Don’t make me lose you too. Come back with me.

Bring me another patient, I want more time with this one.

The truth is no one killed them, they just went like everyone else. Got sick.

The boy had forgotten what it meant to be hidden from the outside world. But this time the fence was different, this time he wasn’t truly alone.

Sometimes everything we thought we lost, was right there all along.

When things fall apart, we find out who we really are.

If we can see past the fear, we find out what really matters. And we learn that sometimes, the things that set us apart, can also bring us together.

Because family is what we make it, each one of us. Together.