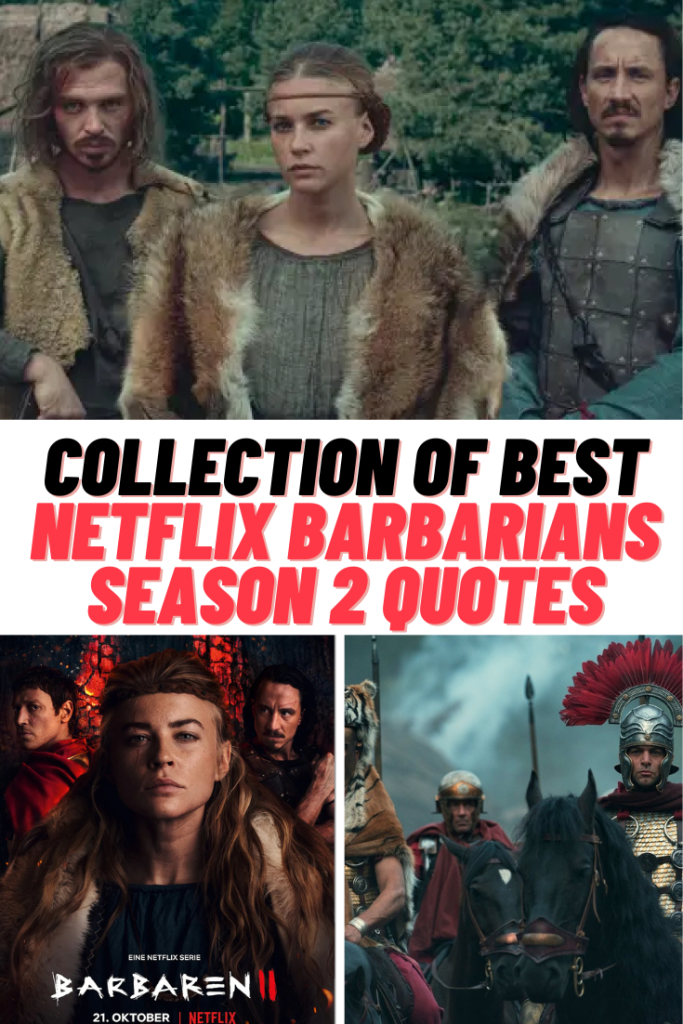 Netflix’s Barbarians Season 2 dropped on the streaming service today, October 21st. I will have a review of the series coming soon, so make sure to stop back by to check it out. It will be linked down below. In the meantime, I wanted to share a list of some of the best quotes from the show. Check out this huge collection of the best Netflix’s Barbarians Season 2 quotes.

Roman is moving quickly. War is upon us.

I don’t believe we’ve needed The Thing for the last few years, Marbod.

Your reputation has reached us in the east.

As declared enemies of Rome, our villages have to be small.

I simply want to destroy this camp.

You want my warriors. I can give you a hundred reasons why I wouldn’t pick a battle with the Romans.

Will you fight with us?

He won’t say yes until he feels it will benefit him greatly.

The Commander of 70,000 spears is pretty easy to spot.

I’m not here as your daughter but as princess to the Cherusci.

They battle to steal what doesn’t belong to them. But if we stand united, they will not succeed.

Let’s hear it for Ari, the fearless Reik. Who led you all into battle like a clever wolf.

Anyone who only thinks like a wolf, doesn’t look too far ahead.

Choose me as your honored king.

Our tribes have to have their blood spilled because you have to prove to yourself you’re not a Roman.

You ruined my life.

We both just want what’s best for the tribes.

Everyone will see that I am a loyal soldier of Rome. And you are nothing but a filthy, stinking Barbarian who recklessly murdered his father.

Leaders can be replaced. 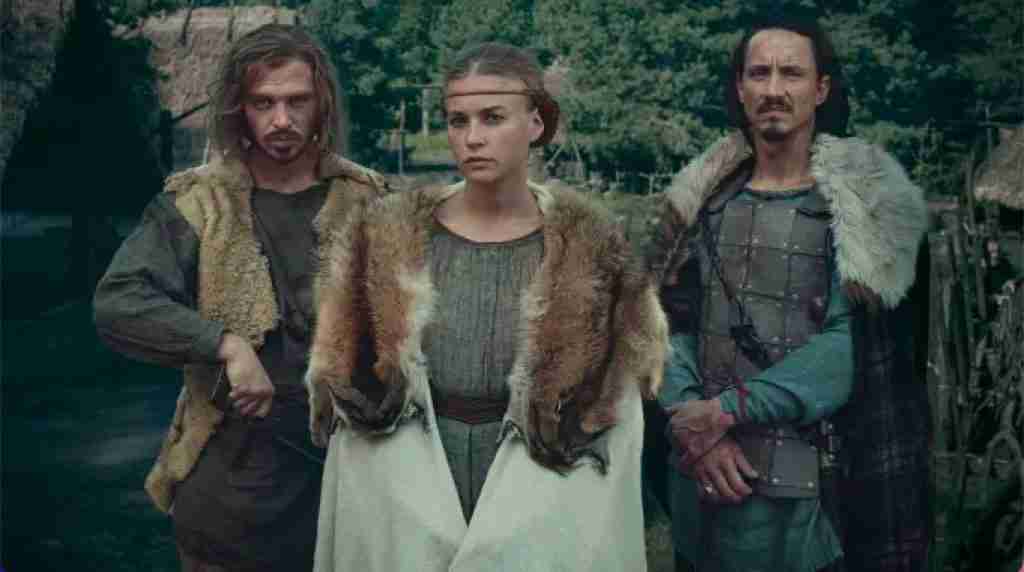 You must be ready to die for people you love.

In Carthage, when the Romans killed my family, I wish someone would’ve helped me then.

This is our land. If you don’t understand that, a whole lot of Roman blood will flow.

Rome is not my home.

You traded Rome for this?

Your face lit up when I said his name.

We are only as strong as our weakest link.

Thanks for getting me out of there, in spite of everything.

I have only one thing to regret: losing you.

She saved me, Thusnelda. From myself.

Some fights have to be fought.

The gods are playing a game with us.

If anything happens to me, protect the kid.

So you are going to attack us? Just like a d*mn dog, huh?

We just keep killing each other, don’t we? That’s good. Good for Rome.

I want you to stand.

The gods get what they want, one way or another.

I know what peace with Rome looks like. I remember when your soldiers crucified Folkwin’s family in front of our tribe. And when they crippled my brother as I watched them.

I don’t know who you are anymore.

I’ll look after my brother the way he deserves.

I chose to renounce the life of my firstborn. I banish him from my life and from my heart. And if it’s a human life you require, then take mine.

Thanks to our alliance with Rome, we’ll all be rich.

Rome isn’t looking for friends. Rome finds subordinates. Because why should they be willing to share when they can take what they want?

Rome tells us lies. They tell us we’re stupid and primitive. And nothing better can happen to us than to be subjugated.

Rome is the wild beast that needs to be brought down.

Life is hard here, unadorned. But I had a happy childhood. And I also want you to be happy.

I don’t believe in peace with Rome. 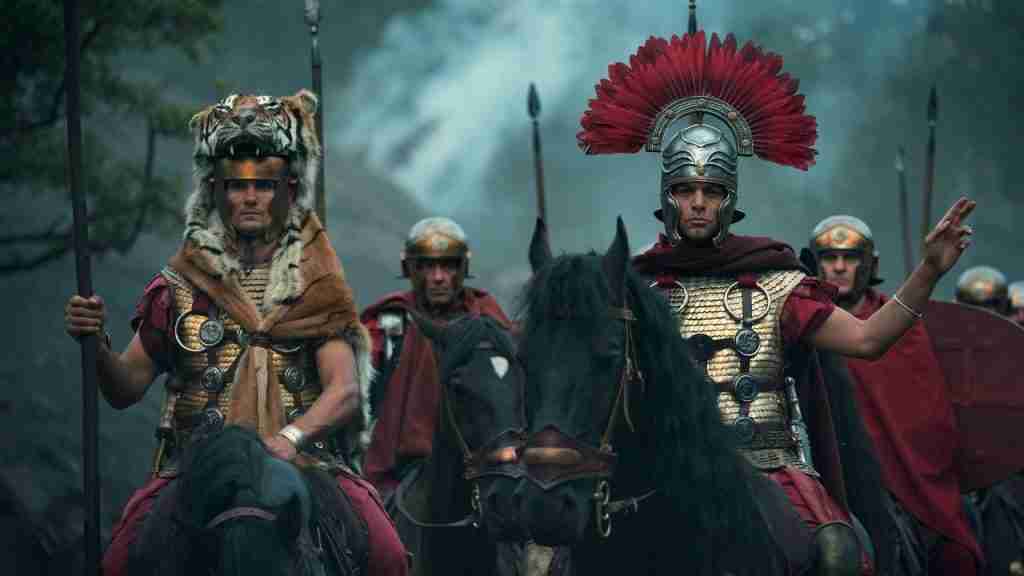 You all experienced what peace with Rome means, and yet you all still believe in it.

From today, we will stand side by side as united tribesmen. And the gods, they shall support us. And the Romans will piss their armors to rust out of fear.

You want me, you’ve got me.

I knew something like this would happen, but not so soon.

If I would’ve done what you wanted, we wouldn’t be here now.

I think we would’ve been here one way or another.

Once my army comes, we won’t spare a moment until the last Roman has been driven out of our land.

Just because I have compassion, doesn’t mean I’m willing to tolerate just about anyone. There will be war. And to be in our tribe, you’ll have to earn it.

If I were blind, I still wouldn’t be lost. Okay?

They’ll follow you because you only start eating after everyone else is full.

One of us is worth three Romans.

I didn’t want this war; none of us wanted this war. The Romans brought it upon us.

You’re a child, you’re not a warrior. Not yet. Children don’t belong on the battlefield.

For them, we’re all barbarians.

A fox’s burrow always has a second exit, or even a third.

He has the right to choose his fate. Let him.

The world is full of men that conquer and those who stand in their way.

People talk about glory and honor in battle. But there is only life and death.

So much blood was shed. Theirs and ours, blending into the mud.

Life is found in the gaps between battles. Only then can love grow.

I said I would give anything for this freedom. I had no idea what that meant.

He’ll be better off in Rome.

Only with the gods at our side, tomorrow we will be free.