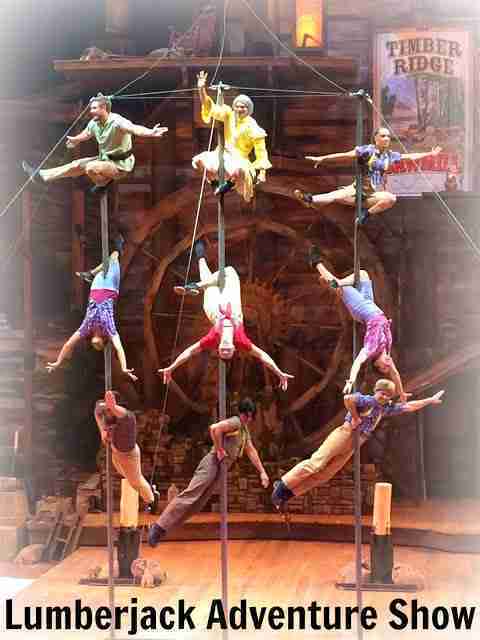 Dolly’s Lumberjack Adventure Show
Last month the family and I vacationed in the beautiful Gatlinburg/Pigeon Forge, Tennessee area.  It was the first time any of us had ever explored the area and we immediately fell in love.  First of all, it is such an amazingly beautiful town, with the mountains as a back drop at every destination, one could not help but bask in its majestic beauty.  Secondly, the town has so much to do and see, we couldn’t possibly do a fourth of the attractions we wanted to on our week long trip.
There was however, a “must do” attraction on our list, we wanted to attend a dinner show!  Even this came with its own obstacles.  You see, the area has so many dinner shows, it was difficult to pick just one.  So we decided, when in Gatlinburg ask Dolly!  Dolly Parton’s Lumberjack Adventure Show made it’s debut to the area last May.  She actually runs two dinner shows in the area, the other being the Dixie Stampede, but when we found out Dolly’s father was a lumberjack and this show was somewhat of a “tribute” to him, we knew we had to see it! 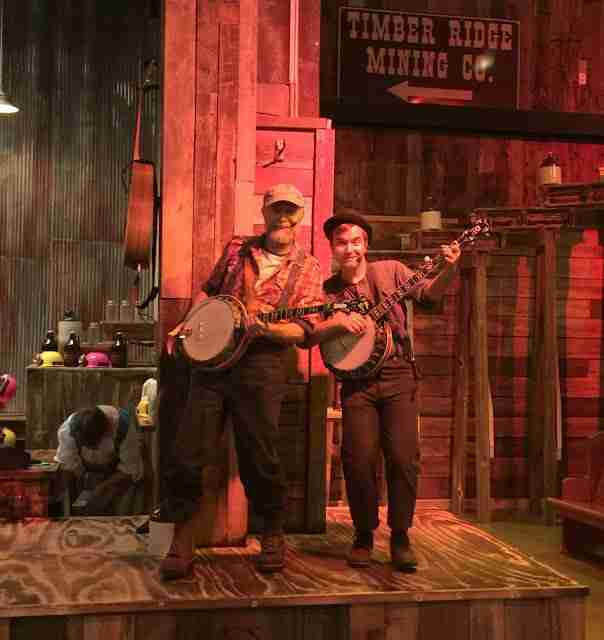 The doors opened about an hour before the show began.  I’m glad we arrived as soon as they did because I would not have wanted to miss all the pre-show fesitivities.  We were serenaded by a couple of banjo playing locals that not only sang but also brought on the comedy! 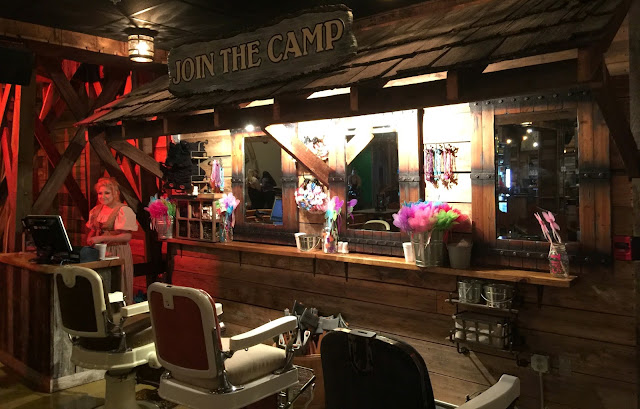 The lobby also included a huge gift shop, a bar with themed drinks (alcoholic and non) and even a small beauty/barber shop where kids could “join the camp”.  For one low price of $14.99, your young one can become a Lumberjack or Mountain Princess.  The Lumberjacks package included facial painting, a black beanie with logo, an axe and leather bracelet.  Mountain Princess attire includes facial makeup, flower headband, necklace, bracelet and wand. 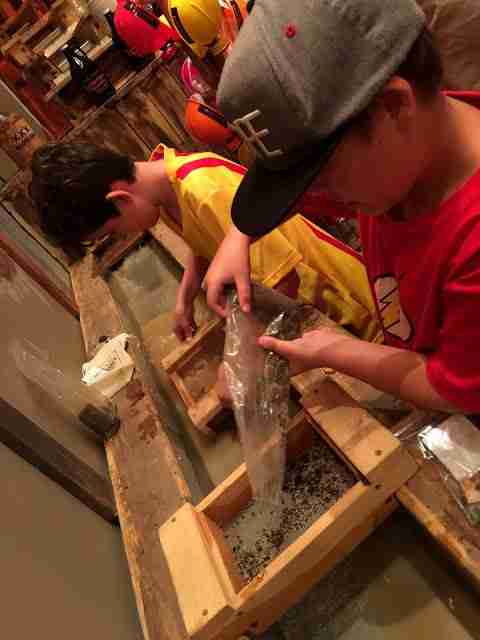 Kids (and adults) could also mine for gold/gems!  “Go back in time and feel like a prospector as you experience GEM MINING at the Trading Post“.  For a 2 lb bag for $4.99 or 3 lb bag for $6.99, you receive bag of sand filled with gems and other interesting rocks you could “mine” right there in the lobby area. 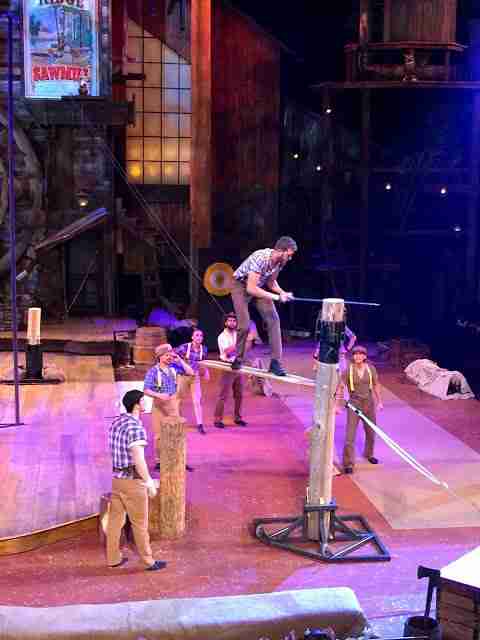 Show Time!  We were seated in arena styled seating, this was expected because the show was the main attraction and one did not want to miss a minute of it!  The kids, my husband and I was entralled from the moment the show began.  It was fun, it was lively and it even incorporated the participtaion of the audience. 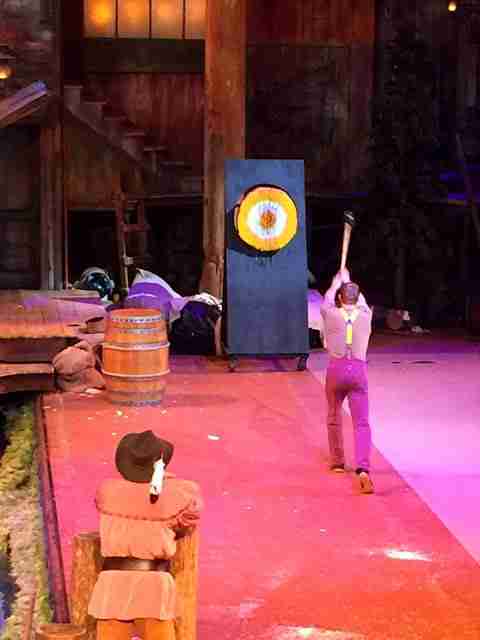 The story was based on two logging families that were in a feud, isn’t this a requirement in mountain families?  However, this feud seems to be a bit on the friendly side.  Instead of throwing punches, this family takes out their aggression in a good ole fashion Lumberjack competition.  This is where the audience comes in.  The arena was split down the middle and one side of the arena rooted for their family, while the other side hooted and hollered for their family to be victorious. 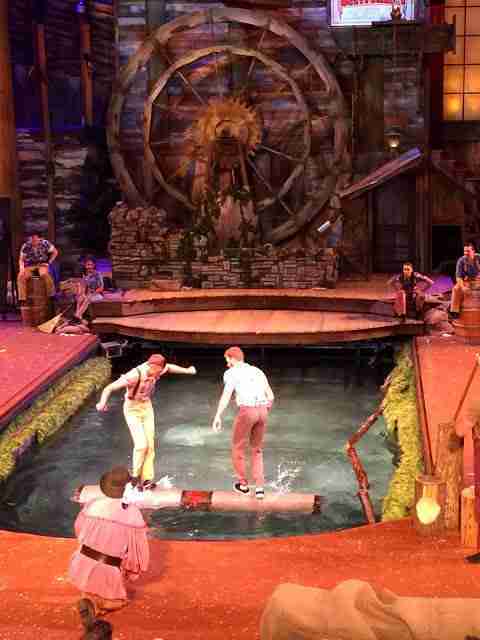 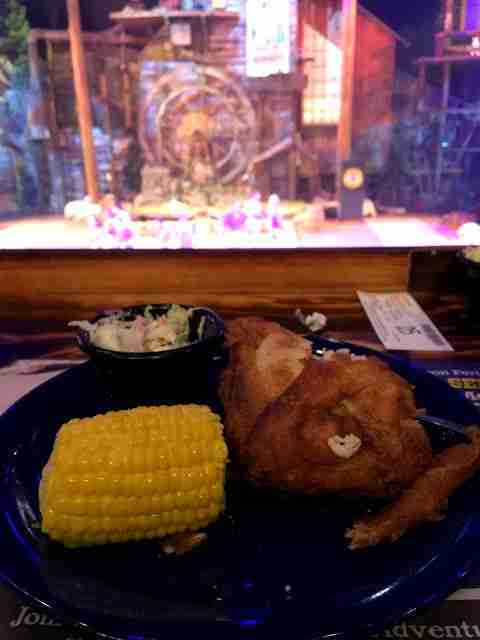 The show was timed perfectly in between the food service (or vice versa).  Oh yes, we can not forget the food because this is a DINNER show after all.  Overall, the food was excellent!  We started off with a “Lumberjack Homemade Biscuit and Timber Slaw”.  I am not a fan of slaw, maybe it was hunger or maybe it was the delicious taste but I sure dug into it the minute it hit my plate.  Next up was the main course which included “Campfire Fried Chicken, Smokehouse Pulled Pork, Homestyle Fried Tater and Corn on the Cob”.  To top it all off, we had a warm peach turnover for dessert.  One thing is for sure, you will leave this dinner show with a full belly of delicious food. 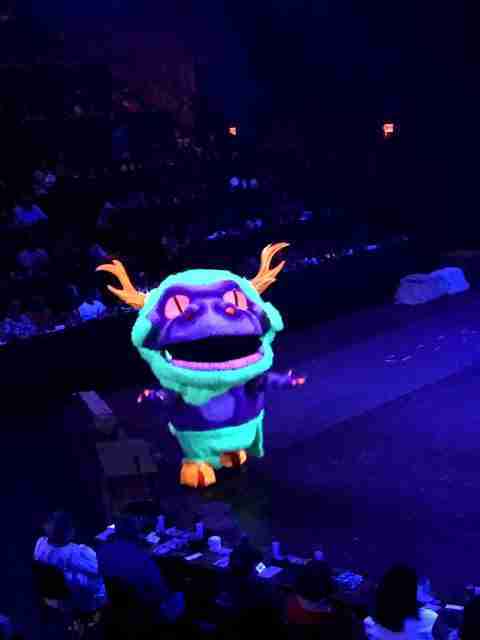 Have you ever heard of a “Boo Hag”?  If not, the Lumberjack Adventure will school you and have you checking under your bed at night.  Oh it wasn’t really that scary, but it was interesting to learn about the folklore and will have you leaving the show saying “don’t let de hag ride ya!”  I may or may not have quoted that saying the rest of the trip. 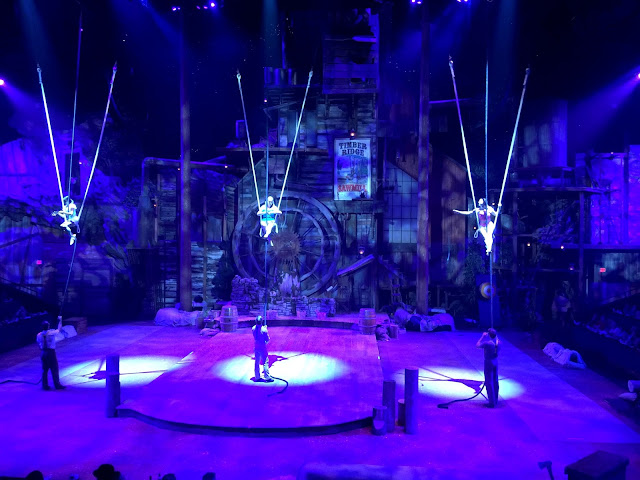 I don’t want to give away too many spoilers of the show because seeing it in person was simply amazing.  However, I did want to mention the outstanding acrobatics that was incorporated in the show. 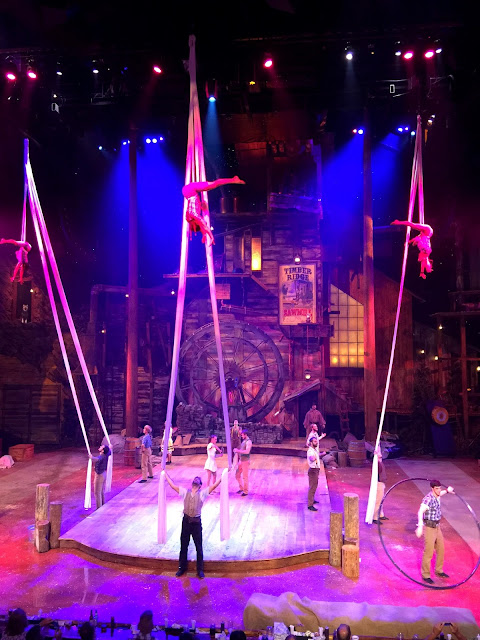 It was SO very impressive!  My kids kept asking, “Are they REALLY doing that, Mom?  No way!”  It was quite unbelievable. 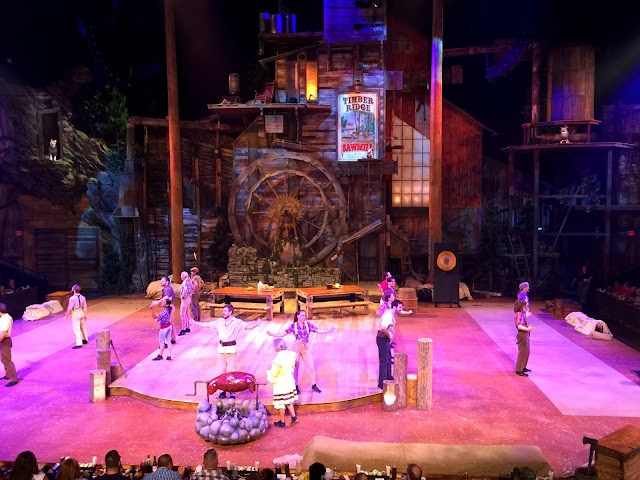 As you can tell, we definitely had a marvelous time and we can’t wait to attend another.  We are thinking about taking a trip to Branson for Dolly’s Dixie Stampede because in my mind, their just isn’t a dinner show like a Dolly dinner show!
The arena was pretty packed the night we attended, I suggest reserving your tickets ahead of time to guarantee seating!  Purchase tickets on the Lumberjack Adventure Show website.
Share
Tweet
Pin
0 Shares

Great Post, Amanda! I am really glad to have stumbled upon your twitter feed and found your blog. My best friend is traveling the US with her husband and 2 kids and I know she would love to visit this dinner show with her young family. And, you've gained me as a loyal follower. I look forward to reading more of your posts. Thanks and cheers