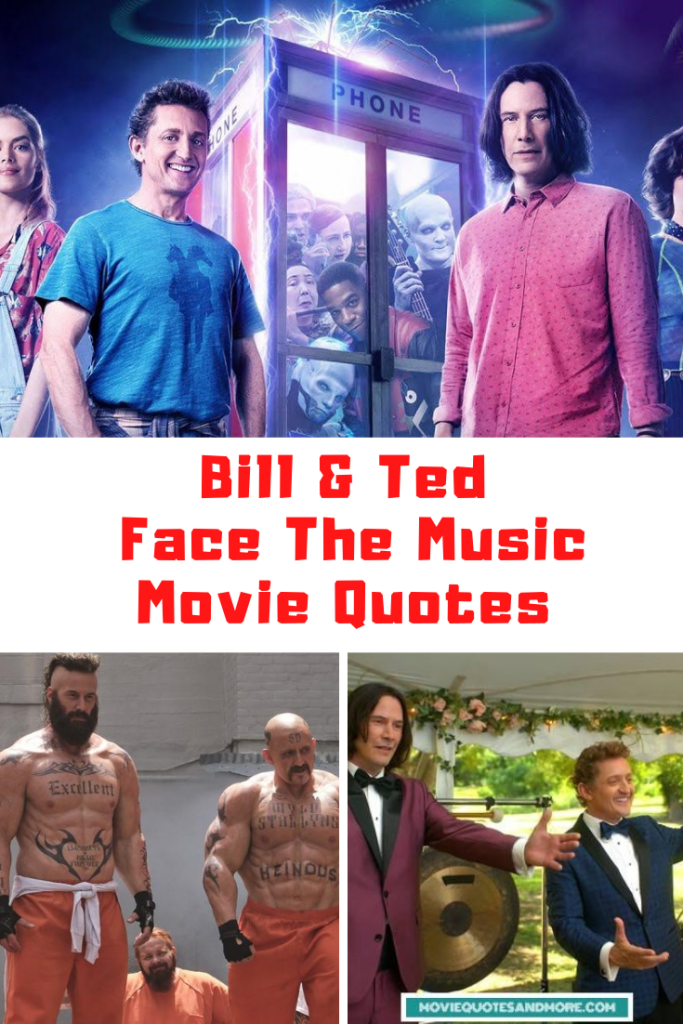 Today Bill And Ted Face The Music, a sequal to the other two movies, dropped in theaters and streaming devices!  Of course, it has some party on and excellent quotes to come out of the movies.  Ones that you will find yourself repeating all day.  And like I tend to do, I jotted down some of my favorites. So check out this list of 35+ excellent Bill And Ted Face The Music quotes.

This is the story of our most excellent dads. –Billie

We’re not sure this is going to be the song that united the world. –Ted

Please enjoy the first three movement of That Which Binds Us Through Time The Chemical, Physical, and Biological Nature of Love An Exploration of the Meaning of Meaning. –Bill & Ted

Liz is right. We have been banging our heads against the wall for 25 years. And I’m tired, dude. –Ted

Ted, we have a destiny to fulfill. –Bill

Be excellent to each other. –Bill 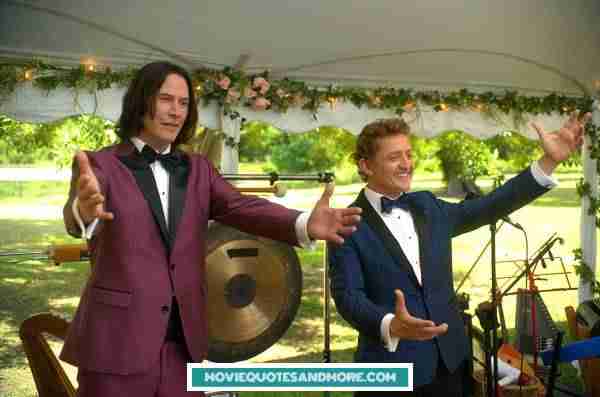 Twenty-five years ago, Wyld Stallyns played a concert at the Grand Canyon. One month ago, you played at the Elks Lodge in Barstow, California, for 40 people, most of whom were there only because it was $2 taco night, whtever the hell that means. –Great One

You were suppose to unite the world in song. –Great One

According to her father, a song created by Preston/Logan at a concert performed by everyone in the band at 7:17 p.m. at MP 46, that’s tonight, will save reality as we know it, uniting humanity across all time. –Great One

That there is the center of space and time. San Dimas 700 years ago, 7:17 p.m. My father believed that the song could be the nexus point that brings humanity into rhythm and harmony. We only discovered this recently, but without it, reality will collapse, and time and space will cease to exist. –Kelly

Some times things don’t make sense until the end of the story. –Bill & Ted

Well, if we haven’t written it yet, but we know we’re gonna at some point, why can’t we just go to the future when we have written it? –Ted

Unite the world and save reality, dude. –Bill

Why don’t you go write it yourselves instead of trying to steal it from us. –Future Ted

After you failed couples therapy, Liz and Jo were visited by other thems from the future who gave them a phone booth and sent them all through time and space looking for just one life where they could be happy with you! –Future Bill

What if after we wrote it and saved the universe, a damn broke and the songs just kept cmoin’ and comin’? –Bill

You’re going to stay here and rot and we’re gonna go get our lives and our wives back! –Prison Ted

You want some Bill and Ted, punk? –Prison Ted

Well, I’m trying to save the world too Mother! It’s not like your generation’s done that great. –Kelly

There are infinite pasts. Each is entangled with infinite futures. –Grandpa Ted

Where you end up all depends on what happens with this. –Grandpa Bill

It’s the answer to everything. It’s called Face The Music. –Grandpa Bill 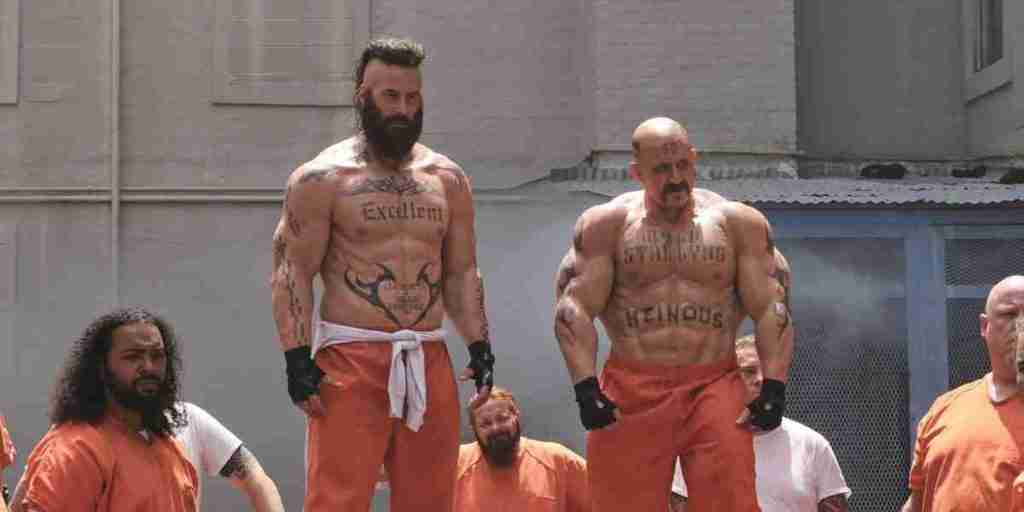 That’s my fault. I never truly opened myself up to you. The truth is, I looked at you and saw myself. –Grandpa Ted

Mistakes were made. Apologies are given. –Dennis

You sent our daughters to hell? –Bill & Ted

Well, Dads, this is the band we put together for you. This is Jimi hendrix, Louis Armstrong. And Mozart and Ling Lun, and Grom. –Billie & Thea

I have been demotes down here because I took two so-called “friends” back up who should not have gone back up. So, if that is why you’re here, sorry, not sorry. –Death

If it isn’t little Bill and little Ted. –Death

I’m sorry fame went to my head. it is very intoxicating. –Death

I got lost. –Dennis

You don’t just get to rock. You got to earn the right to rock. –Death

Your father would be so proud of you. –Great One

It wasn’t so much the song that made the difference, it was everyone playing it together. And it worked. –Billie & Thea