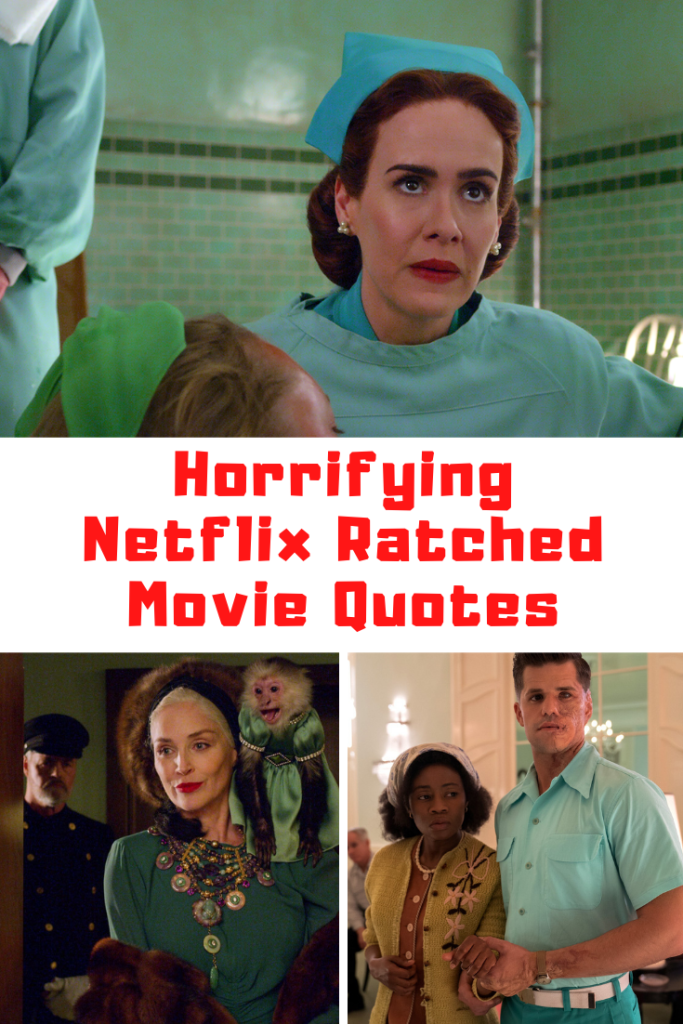 Netflix has a new series coming starring Sarah Paulson called Ratched!  It is a crazy but awesome series based off the prequel to One Flew Over The Cuckoo’s nest.  I have my series review linked below, but I also wanted to share some of the best quotes from the series. I compiled a huge list of some of my favorite and most shockings.  So, check out my list of 85+ shocking Netflix Ratched quotes!

And if you enjoyed these Netflix Ratched quotes, you may also like these posts: Antebellum movie quotes, Red Shoes And The Seven Dwarfs quotes, Jurassic World Camp Cretaceous quotes, This Is Paris quotes, The Devil All The Time movie quotes, The Babysitter Killer Queen quotes, Enola Holmes quotes, Netflix Away quotes.

Hello, Monsignor. Sister Margaret McGuire, you remember her? She was my mother.You’re my dad, Monsignor. –Edmund

And just so you know, if you happen to have any gentlemen callers, I’m going to know about it. And I do not run a house of ill repute. Do you understand me? –Louise

You see, Governor, I don’t run a loony bin. My hospital is a bastion of recovery and rehabilitation unlike any other. –Dr. Hanover

Do you have scat throwers here? Patients who throw their feces? –Mildred Ratched

I’ve encountered many cases of soldiers with battle fatigue, who lost their wits entirely. men who would try to rape a woman if they could get a hold of her, and when they couldn’t, would content themselves by throwing excrement… ejaculate. –Mildred Ratched

We had a saying in the Core, “Save one life, and you’re a hero. Save 100 lives, well then, you’re a nurse.” –Mildred Ratched

Do you believe the human mind can be cured? –Mildred Ratched

If there is one thing I’ve learned Doctor, it’s that life can be quite unpredictable. –Mildred Ratched

I’d let him sink his teeth into me and suck me dry. –Louise

Let’s pretend we are husband and wife and we just had a fight. –Mildred Ratched

Tell him this town is poison and you want to get as far away from it as possible. –Mildred Ratched

We don’t chain anyone up, he is a human being. –Dr. Hanover

You are going to spend the rest of your life here because your family never wants to see you again. –Mildred Ratched

You are not sorry but you will be. –Mildred Racthed

The governer believes this facility can become a shining example, not just of what we can accomplish as a state, but what we’re capable of as a nation. –Gwendolyn

My mother gave this to me on the morning of my first communion. And I want you to have it so you know there is another child of God out there who is praying for you. –Mildred Racthed 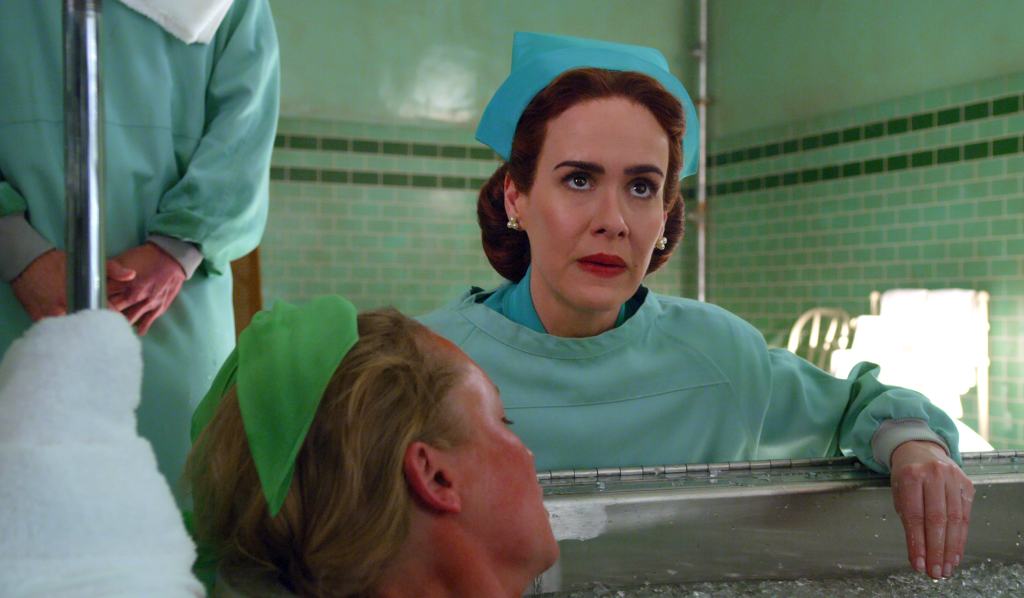 I feel as if I have seen the future. –Mildred Racthed

Monterey is nothing but longshoremen and morphine addicts trying to sell their poetry. –Mildred Racthed

This procedure is sadistic and Governor Wilburn is staking his entire relection on it, something that I don’t know that voters are able to accept. –Gwendolyn

I believe there are some things that are worse to feel than simply feeling nothing. –Mildred Ratched

I believe the human mind can crack. I believe a person can snap when experiencing certain stimuli, specific traumas. A person can quite literally lose control and commit unspeakable acts of violence and depravity. They can rape and mutilate one priest, stab another, shatter the skull of a third, and nearly decapitate a fourth, and still they are not necessarily insane, nor are they beyond rehabilitation. –Dr. Hanover

I’m not your secretary. Pick up the phone and ask them yourself. –Nurse Bucket

Edmund Tolleson is my brother. He wasn’t born a monster. Somebody turned him into one. –Mildred Ratched

Dr. Manuel Banaga is a monster. He’s brilliant, charismatic, but he’s insane, and he doesn’t know it. That really makes him the most dangerous kind of person there is, don’t you think? I can’t rest until I know he’s dead. –Lenore

Mrs. Cartwright, the lesbianism that has so plagued your life is a nervous impulse that you evidently can’t control. –Nurse Bucket

No patient is ever gonna go through with that treatment again. Do you understand me? I don’t care if it costs me my job. –Huck

Governor in some cases, the way to show strength is actually to show mercy. –Gwendolyn

Do you masterbate, Dolly? –Mildred Ratched

It’s been a long time since I’ve kissed a woman. –Edmund

I don’t tolerate fornication in my hotel, especially when it’s out of wedlock. –Louise

I don’t know who you are or whether you’ve intentionally inserted yourself into my affairs or whether it was by pure accident. But allow me to warn you that you have found yourself in the most inenviable of positions. –Lenore

Mildred Ratched you are an angel of mercy. –Huck

Search yourself and I think you’ll realize it would be wise to do what I ask. –Mildred Ratched

I am a graduate of the New England Conservatory of Music. The Royal Academy of Music. Of the Juilliard School of Music. –Charlotte

Dissociative disorders are notoriously difficult to diagnose. They present as a whole host of maladies; mania, dementia, melancholy, amnesia, schizophrenia. She’s an extraordinary case, which makes the proper treatment all the more important. –Dr. Hanover

I sent a man to do what was clearly a womans job. –Lenore

If I tell you, they will make me go away again and I don’t want to go away. –Charlotte

There are two things in this world that make me feel right in myself. And one is Dr. Hanover, and the other is revenge. Mildred Ratched. –Nurse Bucket

Since the day I set foot in this hospital, I have loathed you. But you came with the facility, and the previous owner liked you somehow and begged me not to fire you. Nothing is going to happen between us. Nothing! –Dr. Hanover

I am sick and tired of women telling me what to do and I’m not going to take it anymore. –Dr. Hanover

Dr. Hanover is a dope fiend and a basket case who doesn’t deserve someone like you. Someone strong and caring and opinionated, who knows what she wants. That’s what you are, Betsy, a real woman. –Mildred Ratched

Oh Edmund, what have you done? –Mildred Ratched

I’m probably the least scariest man you ever met. –Edmund

Whatever Mildred did they would beat her and yell at her, as well as the other orphan they took care of. –Narrator 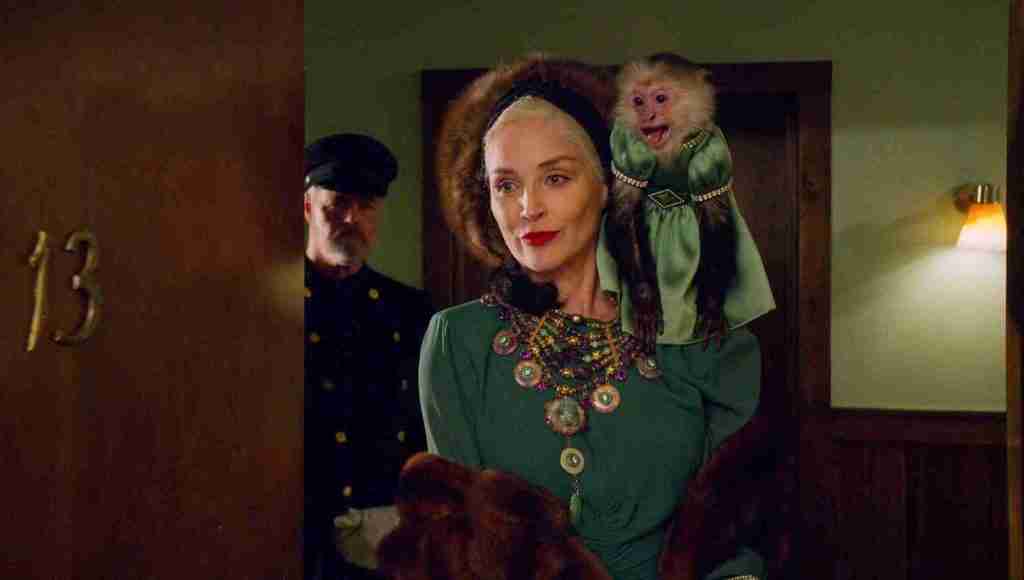 No matter how well they behaved their foster parents hated them and beat them whenever they could. –Narrator

Please forgive me, Edmund. I promise I will come find you one day. I promise! –Mildred Ratched

Most of the families abused us. But this one, this man and his wife, they forced my brother and I to perform sexual acts on one another. –Mildred Ratched

You’ve given me more life than I ever deserved. –Edmund

Don’t you dare address me, Mr. Tolleson. You should thank your lucky stars these men didn’t blow your head off. It’s a far more mercy than I would have shown you.  –Mildred Ratched

I pulled the funding, this hospital will be bankrupt in a month. I lied to him so he’d sign the release. –Governor Wilburn

I take my oath as a physician very seriously. I’ve sacrificed everything for it. So I will not deceive you, Mrs. Osgood. No matter what financial incentive there may be for me to do so. –Dr. Hanover

The behavior your son exhibits. The violence. The delight in harming others, these are not his illness. They are but symptoms. His illness, whatever it may be, remains cloistered deep in his psyche. And my job would be to find it, diagnose it and treat it. –Dr. Hanover

There is something I really don’t have in my life and that’s a sweetheart. –Huck

I don’t know that I have purpose. –Huck

All I was guilty of, was showing these men mercy when no one else would. –Mildred Ratched

Dr. Hanover, you’ve been dismissed. I’ve been name interim head of the hospital until a replacement can be found. –Nurse Bucket

Doctor, I did love you. I love your purpose and your calling. I loved your need to help people. Just to be able to be near you, to watch you, it made me feel so honored. I believe in you. I will always believe in you. –Nurse Bucket

I should’ve never let you into this hospital. –Dr. Hanover

This doesn’t fix anything mother. –Peter

I don’t think that you have any idea what your feelings are, because you have been lying for so long. It’s second nature to you. You even lie to yourself. Well, your lying and your selfishness have cost me everything. –Gwendolyn

It is a new day at this hospital and I am overjoyed and humbled to have been given the opportunity to provide you all with an example of leadership, grace, and world-class caregiving for the neediest among us. –Nurse Bucket

I’ve done some research. I’ve heard about some brilliant doctors who are having the most extraordinary results putting terminally ill cancer patients into remission, and they’re in Mexico. We can cure you, Gwendolyn. –Mildred Ratched

He’ll be brought down a long hallway to the execution chamber. He’ll be strapped to a gurney, and an IV will be inserted into his arm, as well as a backup in case the first line fails. He’ll be given his last rites. In his case, by a priest. It’s ironic. At this point, Edmund will be asked if he has any last words. An injection of sodium thiopental will render him unconscious in a matter of seconds. The second injection is potassium chloride which will stop his heart. Usually, within a few minutes. –Nurse Bucket

Easy fellas, I’m not after no trouble today. –Edmund

You know what they use to call this contraption? The Big Sparky. They put him away for awhile but it’s time we brought him out, put him back to work. –Governor Wilburn 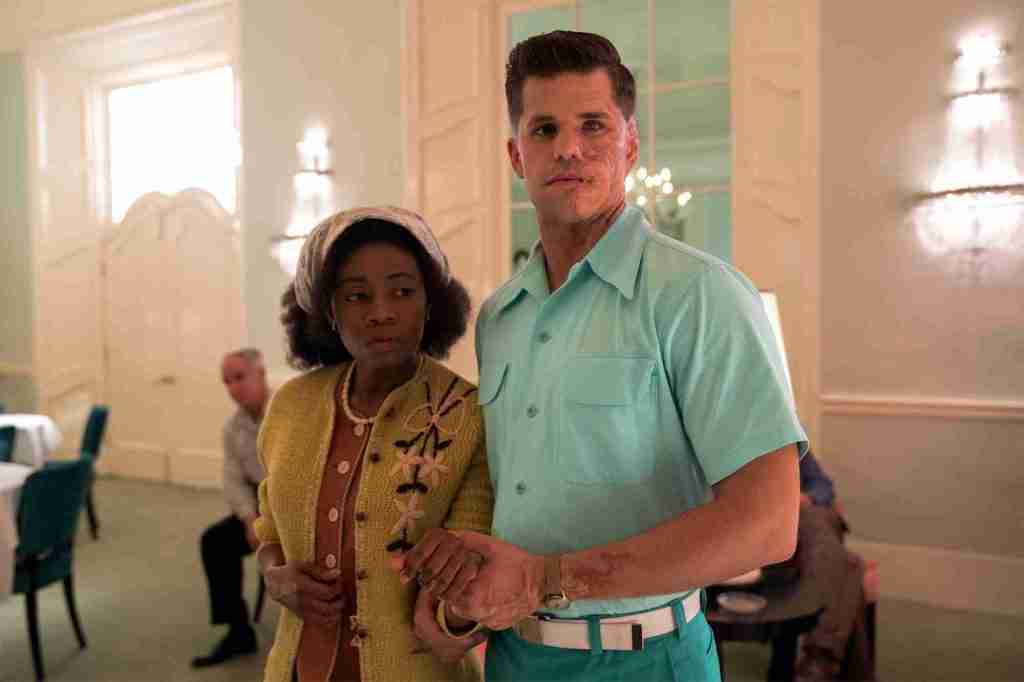 May God have mercy on you. Cause I ain’t gonna. –Governor Wilburn

Why couldn’t you just love me? I sacrificed my life for you. –Mildred Ratched

But I will never be done with you, Edmund. That will never happen. –Mildred Ratched

So you’re a lunatic? –Edmund

She was going to kill you. She knew you’d get the electric chair, and she didn’t want to watch you suffer, so she was going to euthanize you. –Nurse Bucket

It’s been more than 2 years and no one has seen him. He escaped the hospital and disappeared, Mildred. He’s gone. –Gwendolyn

I don’t feel quite free from the past the way you might. –Mildred Ratched

He’s not finished and he won’t be finished until he’s come for me. –Mildred Ratched

It’s a marvelous thing. I started bathing in the blood of the people I kill along the way. It’s absolved me of all my sins. –Charlotte

I’m here to kill you, and then I’m gonna kill myself. Put us both out of our misery. –Edmund

You are going to tell me that I betrayed you. And that you are coming for me. And I should be very afraid. Well, let me tell you something little brother. You are the one who should be afraid. Because I am coming for you, Edmund. –Mildred Ratched