BORAT Subsequent Moviefilm tries to live up the the magic of the original, which is nearly impossible, but in some respects it is even better than the first! It is veryyyy niiiiice! Check out my movie review in this parents guide.

Borat Subsequent Moviefilm comes to Amazon Prime Video TODAY, October 23rd and it is one of those must-see movies. Everyone, and I mean everyone is going to be talking about it. In fact, many are already talking about one particular scene, the Rudy Giuliani compromising scene that has been all over Twitter.  Borat brings back the humor that will having you laughing until your stomach hurts! Is it appropriate for all ages? Lets dissect it in this parents guide.

In the new Borat Subsequent Moviefilm, Borat is back to all his antics but this time he is joined by daughter Tutar (Maria Bakalova).  Borat Sagdiyev is a news reporter from Kazakhstan who is sent to the U.S. by Kazakhstan’s President Nursultan Nazarbayev (Dani Popescu) in an effort to repair the relationship between the two countries. He will present a very special gift, a monkey for Premiere Trump but if Borat fails, he will be sentenced to death. However when the crate containing the “special gift” arrives, he is surprised to see his 15 year old daughter Tutar inside it and the monkey – well, the monkey had been eaten. Subsequently, Borat decides to give his daughter to Vice Premiere Mike Pence, but first she must undergo a makeover. 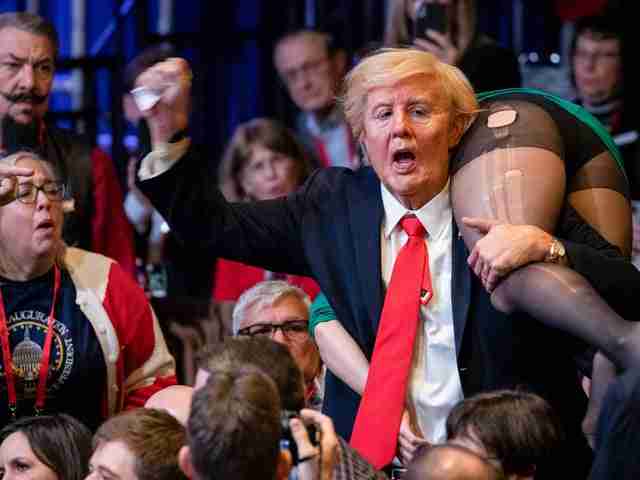 Lets talk about what parents should look out for in Borat Subsequent Moviefilm. If you’ve never seen the first Borat film or the Ali G show, then let me explain a little about Sacha Baron Cohen’s character Borat. He is a character that spoofs much of what is wrong in the world by embracing those “wrongs” in a funny manner.  He takes issues like racism, anti-semitism and even the suppression of women, gives these traits to his Borat and in turn, reveals to viewers just how ridiculous they look by embracing these hateful beliefs.  Borat is edgey and as you might expect, he doesn’t shy away from taboo topics like hate towards Jews, sexism, corruption in politics and suppression of women. An example: Many times throughout the film he laughs at the concept of an American woman being able to own a business and even drive a car.

His humor is crude, very crude.  The movie contains tons of sexual jokes and some nudity.  Examples include him wearing a mask (and nothing else) to cover his “crum” and there is a scene with him and his daughter performing a “moon blood” dance, where she lifts her dress revealing bloody underwear.  As you can imagine, the language is also harsh, it includes the F-word, C-word and much more.  The plot of the film is basically “giving” his daughter to Mike Pence and Rudy Giuliani, and of course there is the Rudy Giuliani Borat scene breakdown everyone is talking about.

In saying this I will let my 15 year old to watch this film, if only for the overall message of anti-hate and revealing that hate towards others because of their religion, sex, color of skin and even political affliation is simple ridiculous.  Sure, the film exposes him to language and crudeness, but it is nothing compared to the things teens are dealing with in real life today with Covid, the election and all the hate we’ve seen on display the past 4 years in America.

If you were a fan of the first Borat movie, chances are you are going to love this one.  I didn’t find it as good as the first but recreating that kind of magic is almost impossible. What really makes the character and these Borat films is the “real” situations Borat is placed in with unsuspecting recipients, however this is almost impossible to achieve due to the popularity of the Borat character. He even talks about this early on in the film, and shows sequences of him being spotted by fans everywhere he goes.  To overcome this obstacle, Borat brought in a new character to aid in the gags, Borats daughter Tutar.  While I enjoyed the whole female look at these spoofs, and it revealing the sexism we currently see in America, Maria Bakalova is no Sacha Baron Cohen.  Don’t get me wrong, she does a great job as Tutar but Cohen is a genius at what he does and is a hard act to follow.

Borat Subsequent Moviefilm will have you laughing until you puke, but it also brings some dark issues to light – which may make some uncomfortable, especially if you are Republican. On Borat’s journey, he befriends a few Trump supporters and quarantines with them during the Covid lockdowns.  It is uncomfortable to watch some of the dialogue revealed by the supporters in his conversaions with them, like when they discuss what they would like to do to Democrats “We can’t do to them what we would like to do, because unfortunately they have the same rights we do.”

If you are looking for a film to get away from the issues going on today, Borat Subsequent Moviefilm will not achieve this.  But what it does achieve is highlighting the damage 4 years of “hate” has done to our country, our country men/women and the relationships around us.  And with an impending election which could swing the pendulum towards more acceptance and kindness once again, I can’t think of a better time to watch a movie like this and a better message one can deliver. 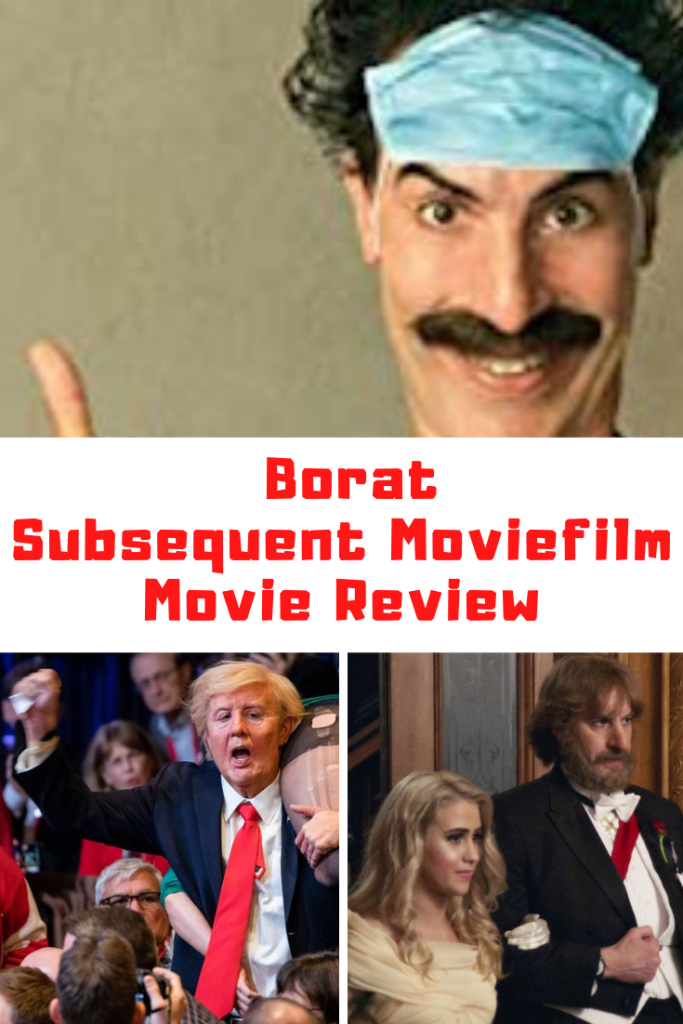